It could be true, if you like comparing apples to oranges.

2020 is indeed a bonkers year. If you'd have told us a year ago that a pandemic would hammer the entire world, we'd have expressed our concern. If you followed that up with a murder hornet invasion in the Pacific Northwest, our hyperbole meter would start dinging. But if you then told us Kia would attack the BMW 3 Series with its humble Optima sedan? Come on, how dumb do you think we are?

And yet, here we are. Actually, the Kia Optima isn't the vehicle in question but only because of a technicality with the name. The Optima is now the K5, and there's no denying it's a good-looking sedan in the mid-size segment. It also gains some legit performance with the addition of turbochargers across all trim levels, available all-wheel-drive for select models, and 290 horsepower (216 kilowatts) in the range-topping GT. That should make the sedan rather spritely, but we say should because we haven't sampled that particular model yet. That isn't stopping Kia from claiming it boasts superior performance to the BMW 330i.

K5 Is Killing It:

That leads us to this curious K5 ad, which says its front-wheel-drive sedan doesn't just out-accelerate the BMW 330i, but outhandles it as well. Specifically, the fine print says the K5 runs a wet or dry slalom faster than the 330i, while also having faster acceleration on dry pavement. However, the fine print also clarifies this applies specifically to the K5 GT versus the rear-wheel-drive version of the Bimmer.

Add all-wheel-drive to the 330i and it's a different story so yes, there's definitely some cherry-picking happening here. Furthermore, at the K5 launch in June, Kia estimated the GT could reach 60 mph in 5.8 seconds, while BMW lists the RWD 330i as hitting 60 in 5.6 seconds. The plot thickens. 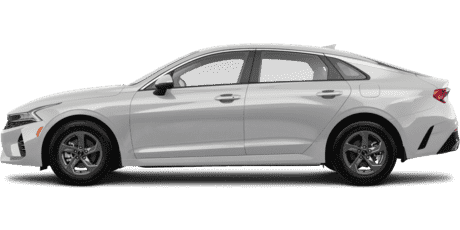 One thing that's indisputable is the price. At $23,490, Kia's entry point for the K5 is nearly half the cost of stepping into the 330i. Of course, this video features the base model Bimmer against Kia's range-topping sedan, but a fully-loaded GT will set you back $37,950. So for an apples-to-apples comparison in terms of performance, it still undercuts the 330i by nearly $4,000.

Anyone else see a K5-versus-330i drag race happening in the near future?