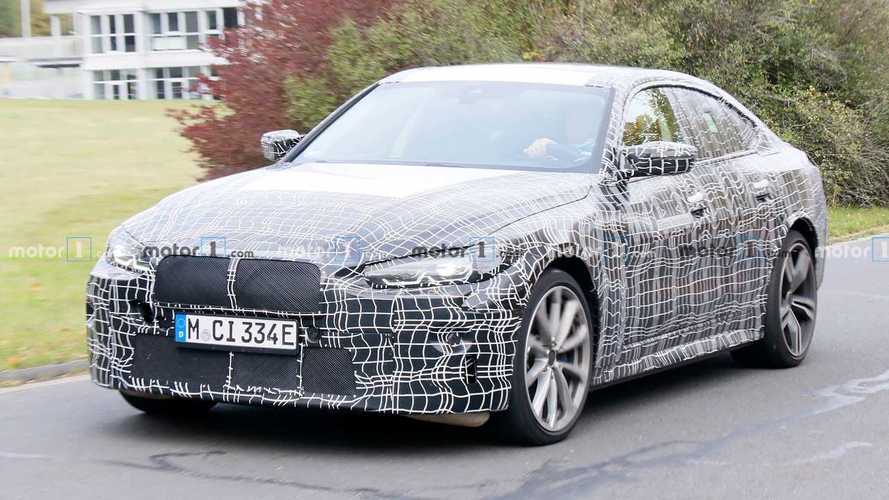 Back in September, after BMW revealed the new M3 and M4, BMW M CEO Markus Flasch said the performance brand’s first fully electric model would be based on the i4. He also mentioned that it’d arrive next year, and new spy photos may be giving us our first glimpse at the electron-powered sports sedan.

However, nothing about the car screams sporty at first glance. A closer inspection reveals M twin-stalk exterior mirrors, and one has to look even closer to notice the slightly wider rear fenders that hide a wider rear track. Hunting for other tell-tale signature M details is futile, though, as camouflage and cladding cover much of the rest of the vehicle. It’s also because this won’t be a full-blown M performance machine.

Instead, it’ll serve as a step up from the regular i4, acting similarly to the M350i and M550i for those respective models. Flasch had said the hotter i4 would fall in the “performance segment.” It won’t dethrone the M3 and M4, though there’ll be hybrid and higher-performance models coming that could. The test vehicle’s camouflage and cladding hide the car’s design details, though we can spot the large kidney grille through the mesh.

What’s Next For BMW M?

Move Over M4, BMW i4 To Become The Most Powerful 4 Series

The sedan’s design is similar to what we saw on the concept, though the trademark concept design features are gone – like the thin-slit headlights and aggressive angular front bumper. The front end is a bit more rounded and subdued on the i4 M and will likely look similar to the new 4 Series front end.

We still don’t know what the i4 or i4 M will offer for specs. BMW put a single electric more in the i4 concept last year, which was capable of producing 530 horsepower (395 kilowatts) that’d propel the car to 62 miles per hour (100 kilometers per hour) in 4.0 seconds. The regular i4 arrives next year, and the hotter i4 M should follow, though if it's not a full-blown M model, we don’t know what BMW will call it.