Toyota Mirai Is Blessed To Be Next Official Popemobile 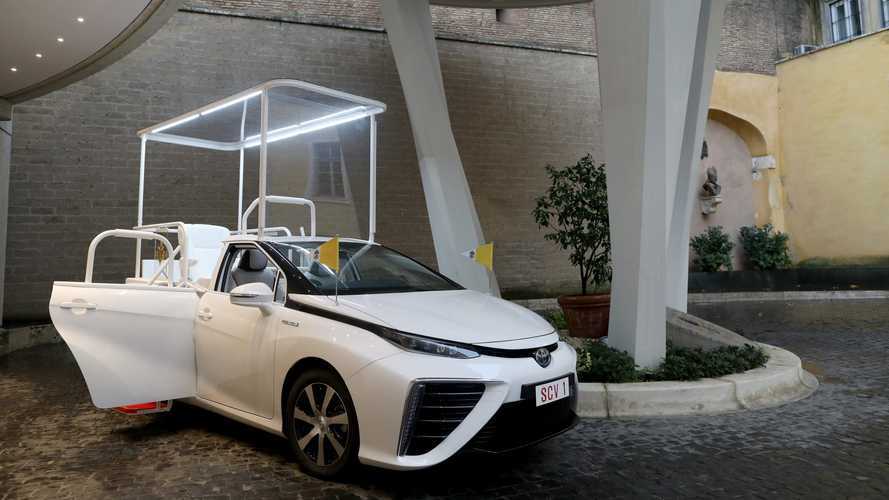 An automobile fit for the Holy Father.

To many, the Pope provides a voice of reason and discernment, steering us in the right direction when we are in need of guidance. However, in his recent tenure, Pope Francis has received a countless number of priceless vehicles fit for such a man.

We’ll be brief, but some of the highlights include a Ferrari Enzo, rear-wheel-drive Lamborghini Huracán, and most of all a bespoke Dacia Duster. Anyways, being the upstanding figure he is, the Pope swiftly auctioned off his Enzo and Huracán to use the funds to help those in need.

With its name translating to “future”, the hydrogen fuel cell-powered Japanese vehicle has been heavily modified to suit the Pope’s particular requirements. While the front remains largely unaltered, the rear features a stark-white superstructure to house the Holy Father, adorned with everything he may need to stay comfortable along his parade routes.

The New Popemobile Is A Dacia Duster Cheap SUV

While the chariot measures 5.1 meters in length, its superstructure adds another 1.2 meters of height to the original, putting it 2.7 meters above the ground. With the performance pedigree of some of the cars His Holiness has received, we’d be remiss not to mention that the Toyota can sprint to 62 miles per hour (100 kilometers per hour) in 9.6 seconds, but it’s clear that Pope Francis wants to savor the journey of spreading his faith. With the Mirai's 340 mile (547 kilometer) range, he will be able to broaden his message while only emitting water from the tailpipes.

The two Mirais were handed off to Pope Francis after the conclusion of a Vatican ceremony attended by representatives of the Catholic Church, the Japanese government, and Toyota. We’d wager Toyota opted for its FCEV to complement His Holiness’ kindness and sensitivities to mother earth.

You might notice that unlike his predecessor who encased himself in bulletproof glass, the Pope now rides in an open-air machine. When asked about the lack of protection after his tenure began, he famously said “at my age, I don’t have much to lose.” Therefore, the new Popemobile begins its stint not only as the Holy Father’s chariot, but also a glimpse into the future of motoring.

Posted on 9 October 2020
A HYDROGEN POPEMOBILE FOR HIS HOLINESS POPE FRANCIS
The Holy Father was presented with the gift of a hydrogen-powered Toyota Mirai specially designed for his mobility
Vatican City State – October 7, 2020. His Holiness Pope Francis received as a gift from the Catholic Bishops’ Conference of Japan (CBCJ), a hydrogen powered Toyota Mirai adapted for his mobility needs.

Present at the delivery ceremony near the Pope’s residence in the Vatican City, were Rev. Father Domenico Makoto Wada, representing the Catholic Bishops’ Conference of Japan and His Excellency Seiji Okada, Ambassador of Japan to the Holy See. Representing Toyota was a delegation of six people led by Miguel Fonseca, Senior Vice President of Toyota Motor Europe, and Mauro Caruccio, CEO of Toyota Motor Italia.

The car is one of two Toyota Mirai vehicles specially made by Toyota and donated to the CBCJ for the Holy Father’s mobility needs on the papal visit to Japan in November last year.

The popemobile has a length of 5.1 meters and a height (including the roof) of 2.7 meters allowing the Pope to stand and be visible to people. The “Mirai”, a word that in Japanese means ‘future’, is the first mass produced hydrogen powered sedan and was launched in 2014.  It is the ultimate zero-emission car powered by a hydrogen fuel cell system, enabling a range of around 500km while emitting only water.

Pope Francis has a deep interest in global environmental matters, which he shared in his encyclical “Laudato si’ “in 2015. This is his appeal to safeguard the earth and all that surrounds us, changing our lifestyle to preserve our “common home”. The Toyota Mirai is well suited to his vision.