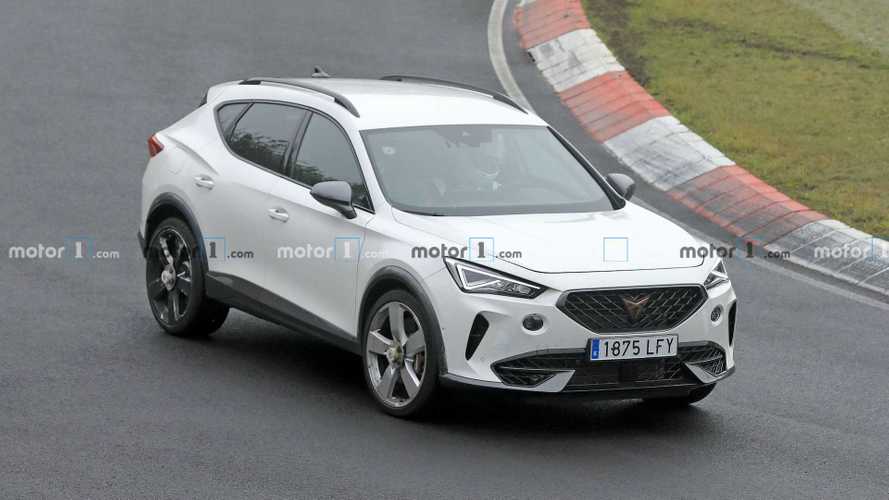 At the beginning of the year, Cupra unveiled its first model as a spin-off brand from SEAT. The Formentor debuted in photos outside the canceled Geneva Motor Show, but beyond its outstanding looks, the crossover touted performance numbers that impress.

But if the Cupra Formentor was a bit short on power on your books, you'd be glad to hear that a 400-horsepower (298-kilowatt) is underway, and our spies caught a white one testing flat out at the Nürburgring with these latest spy images.

The more powerful Formentor will serve as the range-topper, drawing juice from a turbocharged five-cylinder mill. This engine is also the same one that powers the Audi RS Q3, though we suspect a more potent tuning for the Formentor to reach the 400 hp target.

While the spied prototype of the hotter Formentor doesn't show any differences on the front fascia, expect the production skin to have a bit more aggressive styling. Apart from the wheels, the only difference found on this prototype is the diagonally-mounted exhaust tailpipes. We'll know more about the design deviations at launch, but don't hold your breath until the end of this year.

As a reminder, the Cupra Formentor was unveiled with two powertrain options. The first was the 2.0-liter turbo four-banger gasoline engine that makes up to 306 hp (228 kW). The other was the plug-in hybrid model utilizing a 1.4-liter turbocharged engine with 148 hp (110 kW). It works in conjunction with a single 114 hp (85 kW) electric motor for a combined output of 241 hp (180 kW) and can travel 31 miles on electric-only power.

The Cupra Formentor is on its way to dealers this final quarter of 2020. Pricing and availability in other parts of the world apart from the Old Continent aren't available as of this writing.