They look similar to the concept.

The Jeep Grand Wagoneer Concept that the automaker unveiled last month looks production-ready. Calling it a concept feels disingenuous because it doesn't look like your typical concept – inside or out. It doesn't feature cartoonishly large wheels nor a futuristic interior. However, before Jeep settled on the SUV's design, artists sketched countless different possibilities of how it could look.

One Jeep exterior designer posted early sketches of the hulking SUV that doesn't look wildly dissimilar to the automaker's concept. The sketches show a large, long SUV, though there are differences. One features a segmented greenhouse, just like the actual concept, with body-color B-, C-, and D-pillars, while the other uses black trim in an attempt to create a greenhouse that looks like a singular design element. The front ends are also different, though both lack Jeep's iconic slotted grille on the upright fascia.

Both sketches also feature aggressive lower bumpers, which didn't make it on to the concept that features a simpler, stacked design. Much of the Grand Wagoneer Concept's design is seen in these sketches. The drawings feature pronounced wheel arches, which are much more subdued – maybe too subdued – on the concept. More shared styling elements include the hood with its pronounced bulge, which is present on both sketches, and the upward kick in the rear-most window. It'd seem Jeep had little difficulty settling on a design direction for the new model. 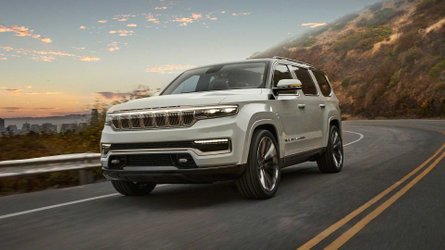 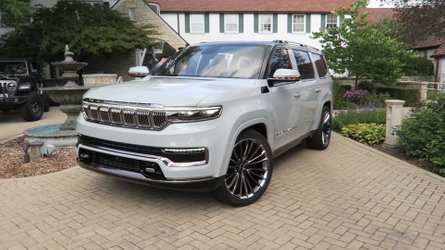 The production Grand Wagoneer won't arrive until the 2022 model year – possibly arriving late next year. However, don't expect it to diverge much from the concept's design. It's similar inside the SUV, too, where Jeep displayed a gorgeous tech-packed and luxurious interior. It'll compete against both mainstream people movers like the Chevy Tahoe and Ford Expedition while also look to steal sales from the Lincoln Navigator and Cadillac Escalade.