The original Bronco had the feature, but it was ultimately scrapped.

The new Bronco’s mission is crystal clear – lure in as many Jeep Wrangler buyers as possible and attract new customers to the off-road scene. Ford did its homework developing the rebirth of its versatile vehicle by giving it Wrangler-like features while adding a few aces up its sleeve. Much like the Jeep, owners can remove the roof and doors for an open-air experience, but unlike the Wrangler, the windshield is fixed in place.

However, the 2021 Ford Bronco almost got a folding windshield as well. The reveal was made by the vehicle’s chief designer, Paul Wraith, while talking to Ford Authority. The initial version of the reborn off-roader was engineered to accommodate a folding windshield, but the feature was ultimately scrapped for the production model: “We looked at that. In the original vehicle, you could do that.”

"But it brings with it some problems. It does provide the user with a fairly rare event, since you start getting into things like flat windshields, which is a compromised construction around pillars.'

To try and maintain that open-air feel as much as possible, Ford decided to look elsewhere. The front pillars were slimmed down as much as possible without compromising safety by moving the airbags in the “sport tubes.” That’s how the company refers to the roof construction from the windshield to the trunk.

For those keen to have this feature, the latest Wrangler has an easy-folding windshield by removing just four bolts and taking off the wipers in a straightforward process that takes only a few minutes. This nifty function has a long tradition in Jeep's heritage, going all the way back to the Willys MB that also had a folding windshield so that it could fit in a crate during shipping in World War II.

While you can’t fold down the windshield in a Bronco, the four-door model allows owners to store the doors in the cargo area at the back. In addition, Ford says the doors are lightweight and easy to maneuver by just one person whereas those of the Wrangler are known to be rather cumbersome. 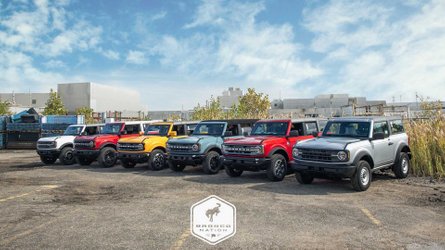