The handbrake broke, but that didn't stop Lia from ripping epic figure-eight drifts.

What kind of car control did you have at age 14? Let's amend that question – what kind of car control did you think you had at 14? Even in our own minds, it probably wasn't the level that Lia Block is already at. Previously, we've seen Ken Block's motorsport-minded daughter rip donuts in his Gymkhana Escort, and recently we witnessed her excitement dismay at getting a Fox Body Mustang for her birthday. Sort of, anyway.

The Mustang wasn't the gift. A day of drift lessons with drift champion and Mustang guru Vaughn Gittin Jr. was the gift, and the video of her time at the track posted today on YouTube. And what do we see? Lia walking the Fox Body sideways in aggressive oppo-lock, turning wide donuts, and nailing difficult transitions to the cheers of those at the track, but that's not all. This experience was a proper deep-dive on the trials and tribulations of living the motorsport life.

The freshly built, Vanilla-Ice-approved 5.0 Fox Body 'Stang suffered not one, not two, but three mechanical glitches that could've sidelined the action indefinitely. The GT's iconic solid front face restricted airflow to the radiator, causing the car to get hot in a hurry. Lia's first full opposite-lock drift with the wheels on the stops saw the passenger tire contact the strut tower, bending the wheel and tearing the inner sidewall. And for reasons unknown, the handbrake – a vital component in the drifting world – stopped working.

Chip Off The Old Block: 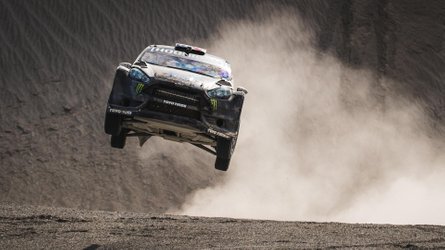 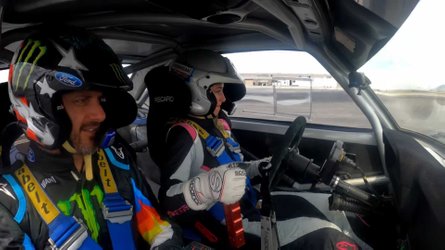 As a result, Lia got a taste of the less-glamorous side of hooning about. She even got hands-on by drilling holes in the Mustang's front fascia, a task she didn't seem to mind at all. That mostly solved the heating problem, and modifications to the shock tower along with a borrowed wheel and tire had the Mustang back on course. If that seems a bit familiar somehow, her dad also had a mismatched wheel on his Fiesta in Gymkhana 5. Mere coincidence, or fate giving us a preview of Lia's future? Yeah, just coincidence. Probably.

We'll say this much. If she decides to follow in the elder Block's footsteps, she has the mojo to do it. The tutorial started out with some simple weight transfer maneuvers to get a feel for the car, but handbrake problems bumped the session to larger donuts and clutch-kicking to get the backside out. In essence, what should've been an easy car to learn with turned into something much more difficult, but even Gittin Jr. was impressed which how she progressed. By the end of the day, Lia persevered through the lessons and the failures to pull off figure-eight drifting without using a handbrake.

To celebrate, she ripped a few donuts and the proud dad moment at the end pretty much says it all. Well done, Lia.