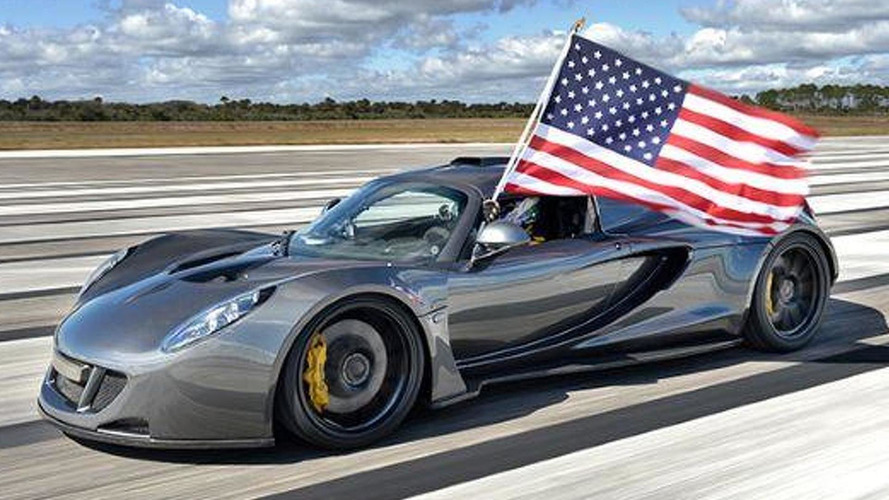 Hennessey has conducted a top speed run with the Venom GT and managed to hit 270.49 mph (435.31 km/h) at the Kennedy Space Center.

Hennessey has conducted a top speed run with the Venom GT and managed to hit 270.49 mph (435.31 km/h) at the Kennedy Space Center.

It was July 3, 2010 when an unrestricted Bugatti Veyron Super Sport managed to set an official average top speed of 268 mph (431,072 km/h) at Volkswagen Group's Ehra-Lessien track near Wolfsburg, Germany. It should be noted the production model was however electronically limited to 258 mph (415 km/h). Now, Hennessey says they currently have the fastest production car in the world as their Venom GT climbed all the way up to 270.49 mph (435.31 km/h).

However, the Hennessey Venom GT cannot receive the title of being the fastest production car in the world because the heavily modified Lotus Exige can't qualify for a Guinness record since it didn't do two runs, one in either direction. An official Guinness record is established by doing an average of the top speeds achieved in those two runs. Since the Venom GT did only one run, the Veyron SS is still the official top speed king for a production car.

Even if it did both runs and surpassed the Veyron Super Sport, the Venom GT still wouldn't have been the new record holder since in order to be eligible to receive this title the car must be built in 30 units and Hennessey announced they will only make 29, with 11 of them already delivered.

Interestingly, Hennessey believes the car would have been capable to reach even 280 mph (450.62 km/h) if it had another mile to run. In addition, the American tuner says the Venom GT has what it takes to "be the fastest at Dunsfold" (Top Gear track).