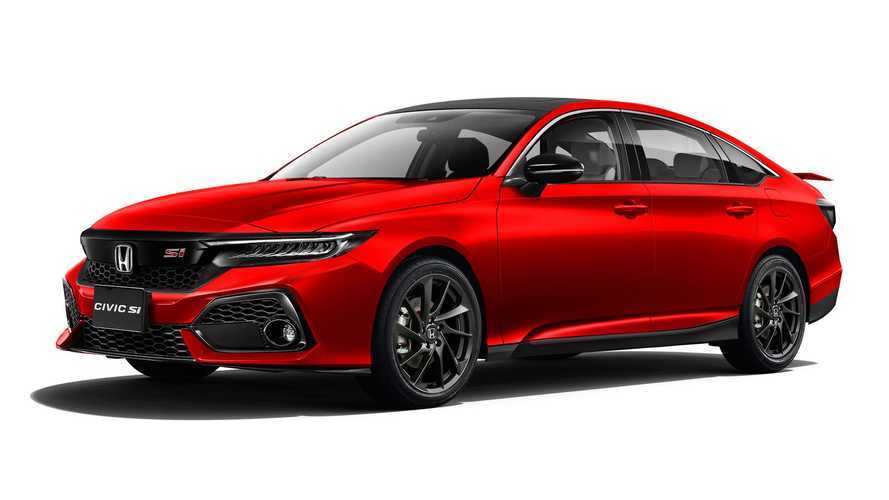 Is the design too restrained?

The next-generation Honda Civic will debut next spring for the 2022 model year. The Japanese automaker has already told us there’ll be a hotter Si version, while spy photos have revealed the Type R will continue, too. Design trademarks have provided a good indication of how the new Civic will look, and KDesign AG has used those images to create two sleek next-gen Civic Si preview renderings.

The Si was never one to radically tweak the Civic’s design, and the renderings previewing the new Si takes a similar approach. Just like the regular Civic, the Si wears a simpler design. It looks like someone took a straight-edge to the front end, leveling the headlights and grille. The smoothed creases and edges we’ve seen in those design trademarks carry over to the Si, though the artist did add some nice Si-specific touches.

The front wears a lower fascia similar in design to the one on the current car; however, it’s unclear if that’s how the actual Si will look when it arrives. It seems a bit too busy for Honda’s more restrained design direction it’s charting for its compact offering. Other sporty Si touches include the black roof, a modest rear spoiler, a single slim center-mounted tailpipe, and plastic cladding along the bottom. While there are no renderings of the inside, we expect subtle trim, badging, and stitching to indicate the Si trim.

The Next-Gen Civic Isn’t A Secret:

Details about the Civic Si’s powertrain, or the next-gen Civic in general, are scarce. The current Si uses a turbocharged 1.5-liter four-cylinder making 205 horsepower (152 kilowatts) and 192 pound-feet (260 Newton-meters) of torque. The new Civic Si should continue with the same powertrain or something similar. We don’t expect any hybridization to occur until later, possibly with the Type R. However, we won’t know Honda is planning until the new Civic arrives next year. Even then, we’ll likely need to wait until after the regular Civic reveal for Honda to detail the Si.