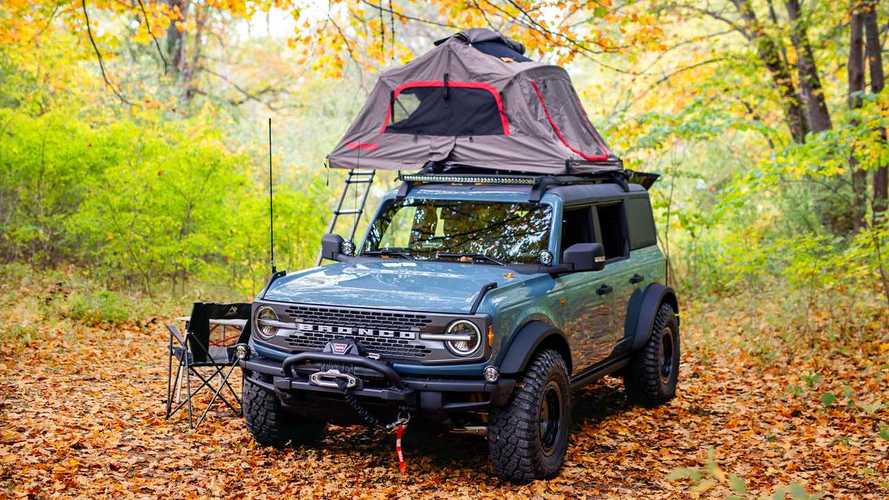 No campground? No problem.

Ford hasn't been shy about touting Bronco accessories. That said, we haven't really seen much about them save for occasional accessorized concepts like this one, decked out for camping enthusiasts. It's called the Bronco Overland concept, and it offers a brief-but-interesting look at some gear for extended off-grid adventures.

The obvious addition is the large roof-mounted tent. It's a two-person heavy-duty tent from Yakima, accessed by a deployable ladder. Since camping isn't just about sleeping, the interior gets a cargo management system that includes an ARB refrigerator, stove, and cooking kit. There's a slide-out tray for the refrigerator, and a tailgate table with folding chairs are part of the package as well.

Staying comfortable is all well and good, but before you can stretch out, you need to get to the campsite. For that, Ford selected the four-door Bronco Badlands model as the starting point and upgraded the tires to the 35-inchers on 17-inch Fifteen52 Traverse HD wheels. A Ford Performance modular steel bumper with a WARN winch sits up front, while a RIGID rack-mounted light bar and six additional light pods sit on the roof. They provide 360-degree lighting, and if things really get desperate, you can call for help on the CB radio, which is so cool to include.

Curiously, under the hood of this upfitted Bronco is the base 2.3-liter EcoBoost engine, connected to a 10-speed automatic. For a special project like this one might expect the more powerful 2.7-liter EcoBoost V6, but the four-pot still delivers 270 horsepower (201 kilowatts) and 310 pound-feet (420 Newton-meters) of torque. It should be more than enough to carry the off-roader and all its gear to remote locations.

It's not entirely clear if all these items are part of the Bronco's 200-plus factory-backed accessories that should be available when order banks officially open. A comprehensive list hasn't been revealed yet, but that could be coming soon. It's conceivable this truck was built for the now-canceled 2020 SEMA Show, which would be an ideal time to reveal all the Bronco's accessories. If that's the case, we could have a clearer picture of just how mild or wild Bronco buyers can get with official accessories by the end of October.