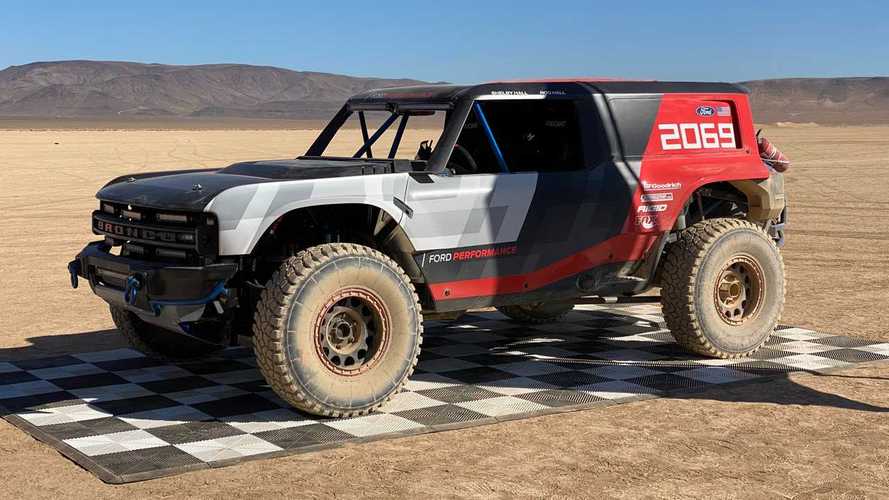 The original Ford Rough Riders competed in the early 1990s.

The United States Patent and Trademark Office only accepted the applications on October 2. It generally takes several months for a filing to go through the process of actually becoming a granted trademark, so don't look for a Rough Riders racing team return until some point in 2021 at the earliest.

The original Ford Rough Riders (learn more about it in the documentary above) competed in off-road racing from 1991 to 1995. It consisted of several teams competing in various classes that had engineering and logistics support from Ford Truck Operations and BF Goodrich. This united front of competition scored more than 20 driver and manufacturer championships over this period. Meanwhile, the automaker used the effort as a development testbed for things like chassis, suspension, and drivetrain components, according to a history of the Rough Riders from Off-Road Xtreme.

By showing off the Bronco R, Ford is already heavily hinting at its intention to compete with the SUV in off-road motorsport. It even ran in portions of the 2019 Baja 1000 as an exhibition.

The Bronco R vaguely looked like the production SUV but with bigger fenders and no windows. The overhauled suspension used Fox components to provide 14 inches of travel in the front and 18 inches in the back. It rode on 17-inch wheels and 37-inch tires.

Fitting with the win-on-Sunday-sell-on-Monday concept, Ford is already teasing a meaner, road-legal Bronco. Allegedly going by the name Warthog, it rides on 37-inch tires and allegedly packs the 400-horsepower (298-kilowatt) twin-turbocharged 3.0-liter V6 from the Explorer ST.