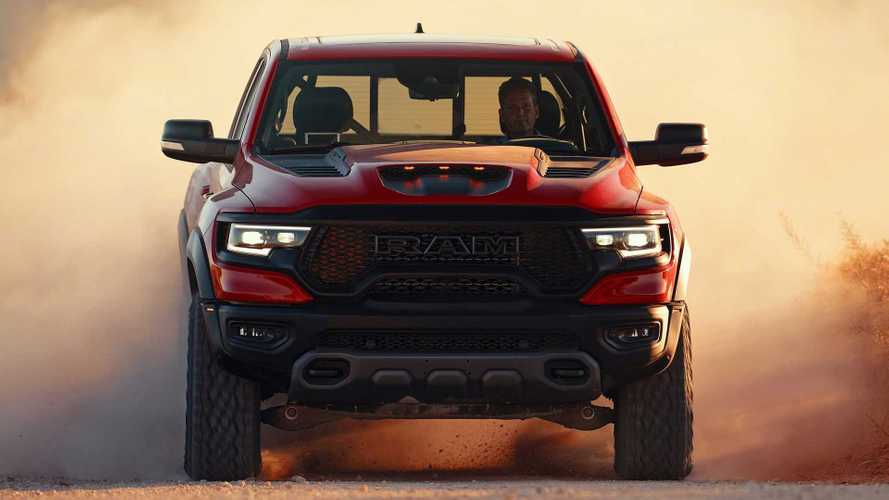 Ram dropping a Hellcat V8 in its 1500 pickup was inevitable. Ever since the Rebel TRX concept debuted so long ago, we knew it had to happen and then came the beefy TRX test mules sealing the deal. Whether that much power is actually usable off the pavement remains to be seen, but there's no denying it will at least be quick on tarmac. At least, in theory it should be quick.

We say that because a video recently popped up from catchmeoffroad on Instagram that claims to show a TRX using its launch control in a parking lot. Such an environment doesn't leave much room to run, so this sprint is really just a short rollout. Given enough space, Ram says the TRX can hit 60 mph in 4.5 seconds but to be honest, this truck looks a bit sluggish off the line.

We also see it noticeably lurch when the revs come up. Maybe this is just a simple brake torque instead of a full-on charge with launch control? We can only go by what the Instagram post says, so interpret the video as you will.

TRX Gonna Give It To Ya:

Of course, the TRX does weight over three tons. Ram didn't just drop in the Hellcat and call it good – the frame of the TRX received all kinds of strengthening and reinforcement to the point that only 25 percent is shared with other 1500 pickups. Even with 702 horsepower (523 kilowatts) under the hood, such mass won't accelerate with lightning speed.

There's also a plethora of heavy-duty driveline components beneath the TRX to both add weight and absorb power, not to mention 14 inches of suspension travel at the back. This truck certainly dips its tail on takeoff, accompanied by a touch of tire squeal and the raspy, raucous V8 exhaust note that we're still struggling to believe is factory stock. Any way you slice it, the TRX is a loud and proud pickup and with the Launch Edition long-since sold out, there are plenty of folks eager to take it for a spin.

That will happen soon enough, as TRX Launch Edition deliveries should begin before the end of the year.