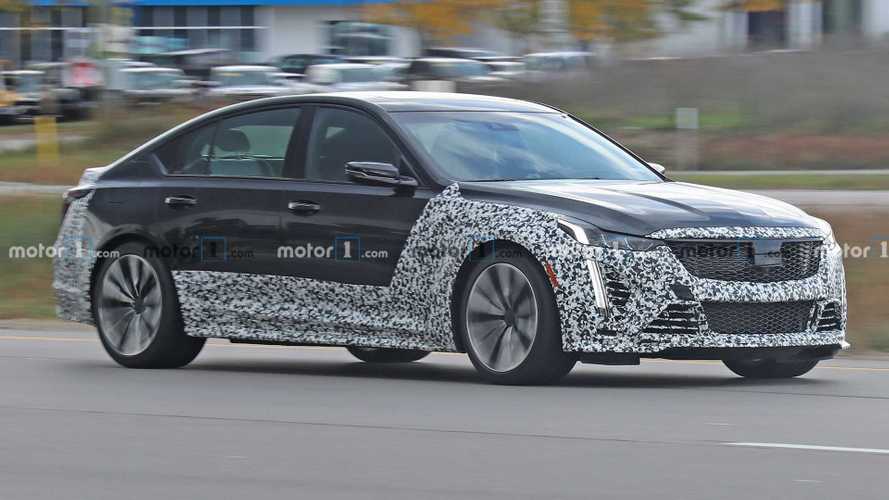 It doesn't look much different from the standard model, but it should be considerably faster.

We haven't seen much of the ultra-high-performance Cadillac CT5-V Blackwing since its existence was acknowledged well over a year ago. It is coming though, and judging by the lack of camouflage wrap on this recently spotted prototype, it could be coming soon.

This fresh set of spy shots catches the speedy Blackwing zipping by the camera, but it's enough to give us a good look at the Caddy's front, side, and rear. Exterior-wise, the super sedan shouldn't fall far from the CT5 tree – the rear fascia likely hides a modest diffuser, and the wing atop the decklid looks ever-so-slightly larger. Rocker panels look just a touch lower – merging with the front and rear fascia for a subtle Blackwing body kit – and while the wheels look similar to those on the standard V, the tires are considerably wider.

The front fascia is likely where the bulk of the visual excitement will happen. It's easy to spot the Blackwing's bolder mesh pattern in the grille, and the lower intake is larger. Corner intakes are also different compared to the V, but the long horizontal LED strip remains in place. The overall effect gives the CT5-V Blackwing a rather sly smile, and if the powertrain rumors are true, it has good reason to be happy.

The twin-turbocharged Blackwing V8 is gone despite this car officially wearing the Blackwing moniker. Instead, we're expecting to find a holdover from the old CTS-V days, specifically the 6.2-liter supercharged V8. In this instance, the engine is expected to make the same 650 horsepower (485 kilowatts) as found in the Chevrolet Camaro ZL1. Perhaps of greater interest to driving purists, however, is the manual transmission option that Cadillac confirmed for the Blackwing.

When will we see it? Recent teasers and this sighting suggest a reveal is coming soon. In a normal world, we'd point to the Los Angeles Auto Show late next month as a key date but the show is canceled. However, automakers still seem drawn to holding vehicle debuts during show timeslots, so mid-late November could be a safe bet for a CT5-V Blackwing reveal.