The Q5 gets a sporty sibling.

The crossover world was made a bit more coupey today with the unveiling of the 2021 Audi Q5 Sportback. This is the same Q5 you’re familiar with, but with a more dramatic look and a bit more sass. The Q5 Sportback is hardly a surprise – the company is adding several Sportback variants, including the E-Tron and Q4 concept. And each of the Q5’s main rivals, the Mercedes GLC and BMW X3 both have coupe counterparts. So, really, it was time for Audi to join the party.

As promised, the headline feature here is a fresh take on the Q5’s design, including a more svelt roofline. The rest of the car wears the same facelifted look that we just saw with the recently unveiled 2021 Q5 – a revised front fascia with new intakes, and sharper headlights with a new lighting signature. Even cooler are the new OLED taillights, which have four different patterns that can be modified according to the owner. And if a car is approaching quickly enough to rear end you, the entire light fixture glows as a big “don’t hit me” warning.

From a hardware perspective, the Sportback is cheating directly off the Q5’s homework, with one major exception: Audi will not offer the plug-in hybrid powertrain in Sportback form. However, there will be normal and S versions, with four-cylinder and six-cylinder engines, respectively. The standard car’s mild-hybrid turbocharged 2.0-liter four-cylinder makes 261 horsepower (195 Kilowatts) and 273 pound-feet (370 Newton-meters). Equipped with a beefier turbocharged 3.0-liter V6, the SQ5 Sportback is good for 349 hp and 369 lb-ft (260 kW and 500 Nm).

Audi is also including several different suspension options, including a standard steel setup and multiple adjustable options. The most notable of which is a new air suspension which can raise and lower the car up to 2.4 inches. This includes raising the ride height by up to 1.8 inches for less than ideal road surfaces. 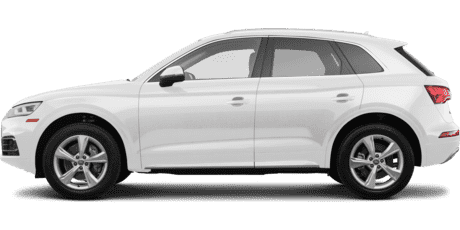 The Q5 Sportback features an updated cabin with Audi’s MIB 3 software. Here, there’s a new 10.1-inch touchscreen that sticks up from the dash, which looks different from newer-lifecycle products such as the Q3 and Q8. It pairs with Audi’s optional Virtual Cockpit digital instrument cluster that gives the whole setup a modern look. Wireless Apple Carplay also comes standard.

Other cabin details like optional wood trim and ambient lighting, give the Sportback a familiar, but upscale feel. Audi wasn't specific on how much headroom the Sportback loses in the rear seat but gave us an idea. During a presentation, one of the car's engineers mentioned that a six-foot-tall passenger would have "plenty" of space. We'll be the judge of that when we drive the car within the next few months.

Arriving next year as a 2021 model, the Q5 Sportback will do battle against more established rivals such as the Mercedes GLC Coupe and BMW X4. Audi isn’t ready to share pricing information just yet, but we can expect the Sportback to command a premium over the standard Q5’s $43,300 starting price.

The Sportback Are Here: