New Porsche 911 GT Debuts In January, But You Can Buy A Build Slot Now

What an unusual way to tease a new model.

In the lead up to this year’s Super Bowl, Porsche came out with a great ad packed with a bunch of already revealed 992-based 911s while briefly showing a new mysterious version. That was believed to be the new GT3, and about eight months later, the track-focused derivative from Zuffenhausen still hasn’t been revealed. We’ve seen a bunch of other new 911 flavors since then, but the GT3 is still a no-show.

Oddly enough, a new teaser for an upcoming 911 is out. Although it doesn’t come straight from Porsche, we’re pretty sure it has the company’s full support. Listed by the Petersen Museum on Bring A Trailer is a build slot for a “new GT variant” set to be unveiled late January 2021. When we say build slot, we literally mean that as the listing only refers to the allocation slot, not the actual car, options, and taxes.

The GTs Are Coming: 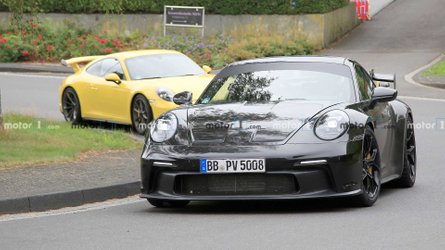 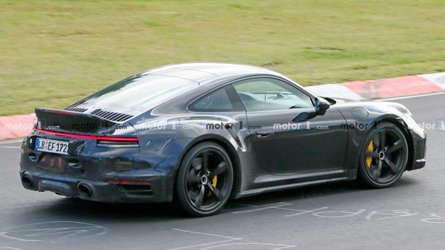 At the moment of writing, the no-reserve listing has garnered 20 bids, with the highest one standing at $5,392. It’s programmed to end in two days and all the proceeds will be distributed to the Petersen Museum’s “annual educational programs, restoration efforts, and strategic initiatives.” We’re dealing with a non-transferable build slot for a car representing “the product of years of testing and work by Porsche’s Weissach engineers to bring the car from the track to the streets.”

The listing on Bring A Trailer also includes a teaser image of the intriguing Porsche 911 GT version. What could it be? We’re tempted to believe it’s not the standard GT3 or the spicy GT3 RS since it’s missing the large rear wing. Using this logic, we could be looking at the GT3 Touring with a subtle spoiler lip, unless the company has developed yet another member of the ever-growing 911 lineup.

Whatever this is, it’s certainly not a fully electric 911 given the Turbo-esque side air intakes revealing it still packs a combustion engine behind the seats. It also doesn’t seem to have the ducktail spoiler we saw on a prototype in early June since it doesn’t seem to stick out as much. With the listing specifically saying it’s a GT of some sort, hiding underneath the cover is a lightweight machine tailored to the circuit.

We're hoping Porsche will come out with a teaser of its own in the coming days or weeks that will help us decipher the mystery.