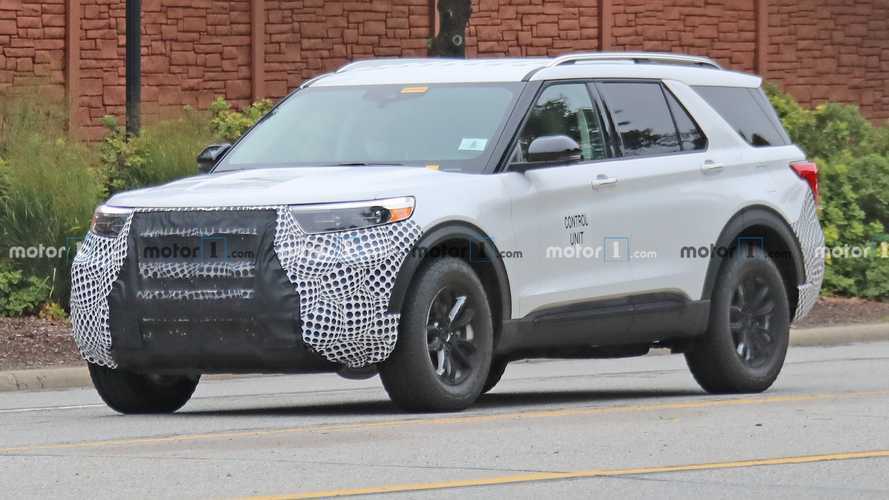 An Explorer for folks looking to go off-road.

The Ford Explorer FX4 will be a somewhat more rugged-looking version of the crossover. These spy shots are our first look at it.

At the front, the FX4 has a revised nose. The grille is different than other Explorer models by featuring an array of horizontal slats with openings between them. Unfortunately, the camouflage doesn't provide a good look at any of the other design changes. Tweaks to the front fascia seem likely, though.

This FX4 rides on black wheels with five pairs of double spokes. The design looks similar to the pieces on the standard Explorer, except for the color. The textured, black fender flares appear to stick out farther than on the existing vehicle.

At the back, there's a revised bumper that seems to end a bit higher than on the current Explorer. Our spies speculate this is an effort to give the FX4 a better departure angle for better off-road performance.

The FX4 version of the Expedition could offer hints at the hardware changes that Ford intends to give to this more rugged Explorer. It gets parts like 32-inch all-terrain tires, off-road-tuned shocks, seven skid plates underneath the vehicle, chrome-plated running boards, and an electronic limited-slip differential. For improved visibility, a 360-degree camera system is also standard.

2021 Ford Explorer Prices Fall Across The Board, And By A Lot

Look for the FX4 to become available on the Explorer during the 2021 model year. Although, the exact timing is still a mystery.

Leaked pricing info suggests the 2021 Explorer gets a price cut. The base model is $540 cheaper, while the range-topping Platinum AWD is $3,770 less. There's also a new Sport Appearance Package for the XLT grade and tweaks for the sporty ST trim.