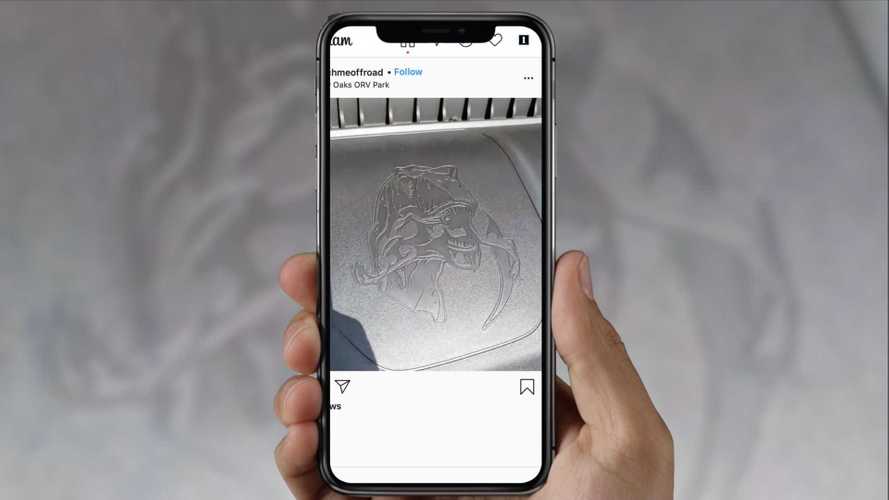 One would think Ford and Ram are now locked in a prehistoric name-game with their off-road pickups, but that’s not the case. While the 2021 1500 TRX does sound like a play on T. Rex, Ram decided on the TRX name because it was something the automaker already had the rights to – a name of convenience. However, it appears the designers felt there was some similarity between the name and the apex predator if one newly discovered Easter egg is any evidence.

A video posted to the catchmeoffroad Instagram account shows a super cool Easter egg hiding under the TRX’s hood – an image of a T. Rex with a raptor clinched between the T. Rex’s razor-sharp teeth. Blood dripping down the Rex’s chin sells the ferocity of the beast. To find it, one has to not only open the hood but also lift the plastic engine shroud. It’s located right there at the front of the engine bay. There’s a good chance some owners may never find it.

The Easter egg is just one shot across the Raptor’s bow as Ram aims to give the Raptor some hearty competition after Ford has been alone in the space for several years. The T. Rex Easter egg is certainly fitting. The Ram’s highlight is the engine – a supercharged 6.2-liter V8 borrowed from the brand’s Hellcat models. It produces 702 horsepower (523 kilowatts) and 650 pound-feet (881 Newton-meters) of torque. That’s significantly more than the Raptor, which uses a twin-turbocharged 3.5-liter V6 making 450 hp (335 kW) and 510 lb-ft (691 Nm) of torque.

We’re eager to see the TRX and Raptor face off in a litany of off-road tests and comparisons. The TRX is far more powerful, but also more expensive, starting at $69,995. The 2020 Raptor is $16,000 cheaper to start. However, that could change. A report that came out the same day Ram unveiled the TRX said Ford would offer the next-gen Raptor with two engines, and one of those would be a supercharged V8. If that happens, expect that Raptor’s price tag and performance to be much more comparable to the TRX.