Today, Ford teased its plans to electrify the F-150, committing $700 million and 300 new jobs to its Dearborn factory for the new model. However, until it arrives in 2022, hybrids will serve as the bridge for the automaker. Those will come with the 2021 model, which entered production today. The first models will begin arriving at dealers by November, and a new video from the F150gen14 YouTube channel shows that those other pickups from those other brands should be worried.

The video shows the 201 Ford F-150 Powerboost Hybrid with the 3.5-liter V6 drag racing the Ram 1500 Hemi E-Torque, with both a towing trailer and a load. To say the race was a blowout would be an understatement. The F-150 leaps off the line and continues to pull away from the Ram, putting a couple of truck lengths between the two vehicles before the short video ends.

Ford’s hybrid powertrain, branded Powerboost, pairs a twin-turbocharged 3.5-liter V6 with a 35-kilowatt motor and a 1.5-kilowatt-hour lithium-ion battery. The automaker hasn’t revealed its horsepower or torque figures, though Ford has said it aims for the model to be the most powerful pickup in its class. The Ram sports the company’s 5.7-liter Hemi V8 that produces 395 horsepower (295 kilowatts) and 410 pound-feet (555 Newton-meters) of torque, giving it a 12,750-pound max tow rating. Ford is promising up to 12,000 pounds of max towing for the Powerboost-equipped F-150. 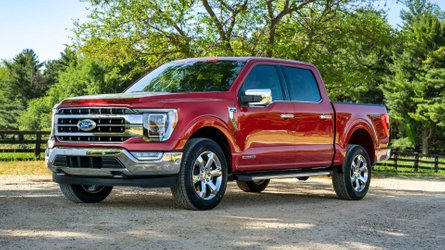 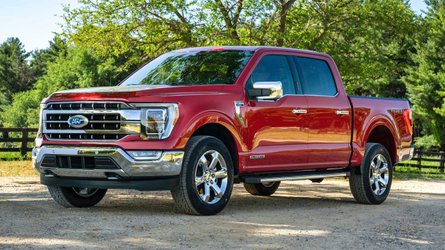 The new hybrid powertrain for the F-150 came with a thorough, though subtle redesign. One would be hard-pressed to pick up the exterior changes of the 2021 F-150 compared to the 2020 model at a distance, but Ford did a lot under the skin. The automaker added a host of small, thoughtful upgrades, like the available onboard generator, a sleeper seat, a redesigned infotainment suite, and even a desk.