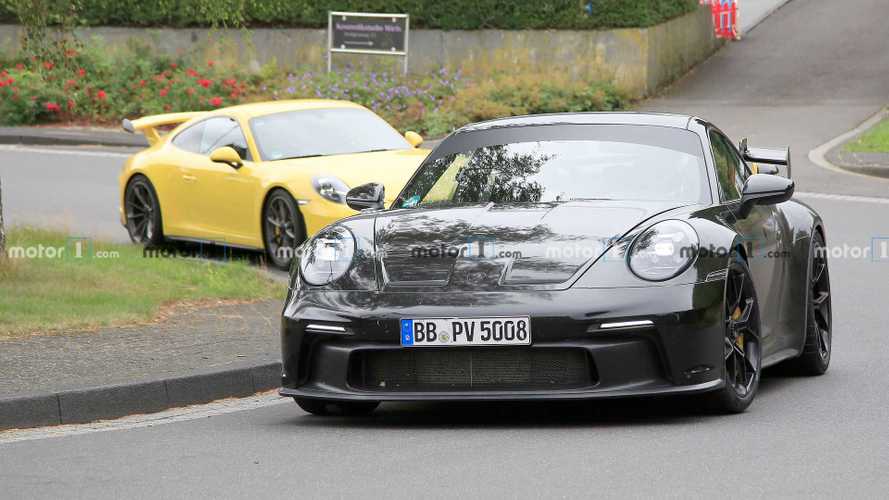 The next-gen Porsche 911 GT3 is (hopefully) inching closer to its full reveal but the Stuttgart-based company is not done with its development yet. In the current testing phase, the sports car is being benchmarked against its direct predecessor.

Thanks to a new batch of spy photos, we are finally able to compare the 991 and 992 generations of the GT3 side-by-side and you can easily see there will be some major differences at the front. The side profile appears mostly unchanged but we noticed the new model will lack the massive air vents on the rear fenders.

A few details tell us this is surely the new 911 GT3. These include the huge wheels with center locks and Y-shaped spokes and the huge wing at the back with a pair of round exhaust pipes. The design of the rear bumper doesn’t look to be in its final form yet as it is still featuring fake plastic panels.

See The New GT3 In All Its Versions:

Most likely, the new model will share its powertrain with its predecessor. It is expected that Porsche will continue to use a version of its naturally aspirated 4.0-liter engine but it will be tweaked to deliver around 550 horsepower (410 kilowatts) versus 520 hp (387 kW) in the outgoing 911 GT3 RS.

We are happy to see work on the 992-generation 911 GT3 continues and we are optimistic the full debut of the car is coming sooner rather than later. There are still some uncertainties after the coronavirus crisis but we hope we will see the sports cars in its full glory early next year.