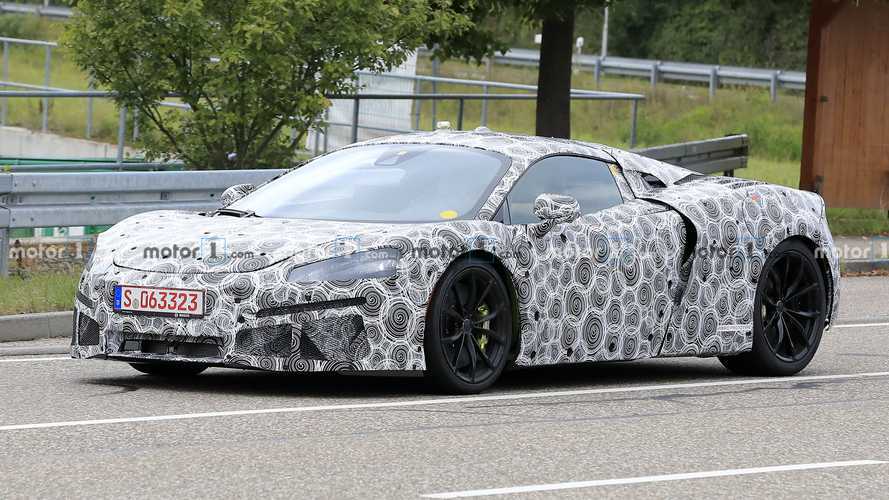 The electrified 570S replacement is still an enigma.

The vehicle you see here isn’t necessarily a first for McLaren. Back in 2012, The amazing P1 was unveiled to the world with a twin-turbocharged 3.8-liter V8 married to a single electric motor, developing a combined 903 horsepower. This camouflaged McLaren likely won’t have that much punch under its bonnet, but it will have electric power.

This is only the second time we've caught McLaren testing its new hybrid model in public. The first time was back in April, though sadly none of the camouflage has been lost since then. We see a shape that looks relatively conservative, though we suspect panels behind the camouflage wrap obscures more flamboyant bodywork.

Still, side vents are long and thin compared to the larger scoops from the 570S, and we don't see anything resembling the aero trickery behind the fenders similar to the 720S. However, we do see 720S-style dual pipes exiting high on the rear fascia, and breaks in the camo wrap suggest a deployable wing is sitting atop it all. Lights front and rear are rather obscured, but LEDs are clearly the order of the day.

The big news for this new supercar will obviously be what's under the skin. The rumor mill is still rather silent on that front, with sources on the fence about V6 or V8 power. Given this is a Sports Series machine, opting for a plug-in hybrid V6 with upwards of 600 horsepower makes sense. That would be a modest improvement over the 570S, and McLaren pledges that its all-new platform with extensive use of carbon fiber will cut weight to offset the hybrid components.

That just leaves us with one question. When will all these other questions be answered? Coronavirus has certainly delayed projects with all automakers, and McLaren's financial status isn't the best these days. Testing for the new hybrid is obviously continuing, and McLaren has confirmed a launch sometime in 2021. Whether that's early or late in the year remains to be seen.