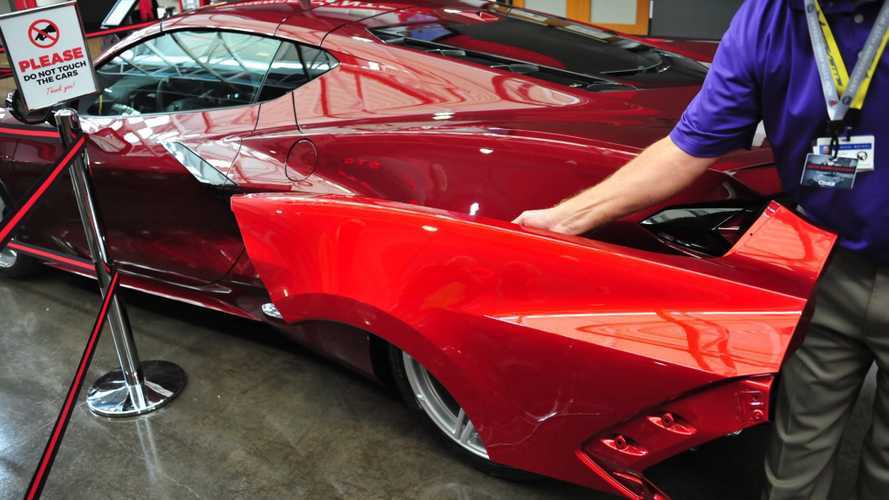 It's not a car-to-car comparison, but it's a start.

Chevrolet is getting ready for the Corvette’s 2021 model year. The C8’s base price for its various trim levels will remain the same, as will pretty much everything else. Two new colors are coming though, and while we’ve seen them before on other Chevy vehicles, we now have a sample of how they will look on the ‘Vette.

The new colors are Red Mist and Silver Flare Metallic. Photos of completed cars in these colors aren’t available, but the National Corvette Museum in Kentucky recently took to social media with some photos of C8 body parts wearing the paint. Located at the Corvette manufacturing plant, the museum is privy to such things and as such, some painted quarter-panels were knicked from the assembly line and compared to outgoing colors on cars at the museum.

Red Mist will replace Long Beach Red in the color chart. Both shades are a darker red, with Red Mist having more of a candy-apple glow. As for Silver Flare Metallic, it will replace Blade Silver and well, the differences are much harder to spot. It appears to be a slightly brighter shade, with perhaps an ever-so-slight blueish tint. We suspect this will be a difference only the most die-hard Corvette aficionados will spot once 2021 Silver Flare models hit the streets.

Ordinarily, we’d be seeing 2021 model-year vehicles reaching dealerships right about now. Of course, 2020 is not the least bit ordinary, and new production for pretty much every vehicle is delayed in some manner as a result. Chevrolet had over 40,000 orders for 2020-model-year Corvettes, and as such, changeover to 2021 isn’t slated to happen until November. Even then, many buyers on the roster for the mid-engine Corvette’s inaugural year will be disappointed. Despite recently adding a second shift at the Bowling Green plant, GM is targeting a total first-year run of 20,000 cars.