Acura NSX Is The Fastest Production Hybrid Ever At Pikes Peak 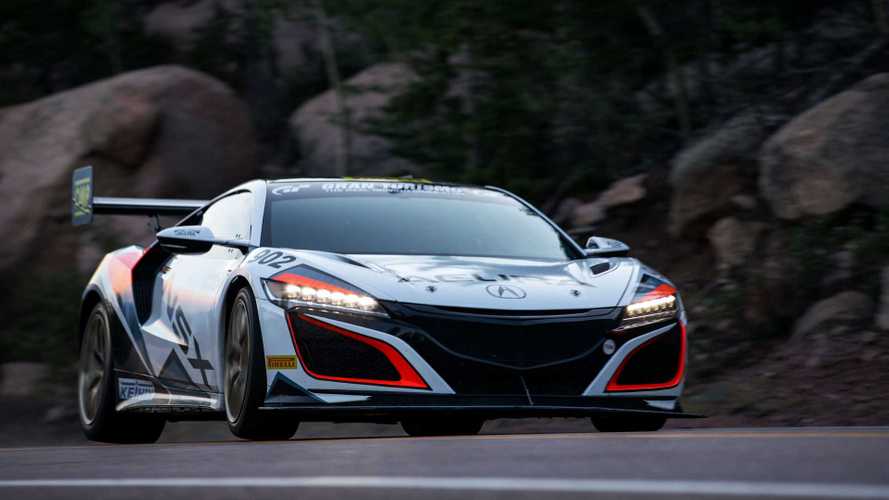 Nestled in the Colorado Rocky Mountains, Pikes Peak is an area that means so much to people from all walks of life. Some may see a hiking paradise, others a quiet one-mile raceway, but ask any petrolhead and they’ll describe it as home to one of the most fearsome hill climbs in the world. In the latest running, Acura proved its hand with the NSX as the fastest performance hybrid in the race.

In the driver’s seat was chief Acura engineer James Robinson, a 10-time Pikes Peak veteran with podium finishes in the Exhibition, Open, and Time Attack 1 classes. This year competing in the TA1 class, he came up against some fierce competition with a Porsche 935 tribute car driven by Jeff Zwart and GT2 RS Clubsport piloted by David Donner amongst the runners.

The NSX time attack special produced a third-place finish in class, with the two Porsches of Donner and Zwart ahead. It’s clear the top three were the undisputed class off the field, with the Acura finishing almost a minute ahead of the next-best car.

Results aside, it’s clear that the NSX competitor wasn’t just a stock vehicle taken from a dealership and dropped on the Pikes Peak start line. The hill climb special sports a massive rear wing, aggro front splitter, 200 pounds of weight reduction, and HRE wheels shod with sticky Pirelli rubber. The engine has also been fettled to the tune of 625 horsepower (466 kilowatts) in comparison to the standard 573.

Aside from exploits up the mountain, Acura Motorsports remains integral to the brand since its launch in 1986. In its tenure, the partnership has produced multiple championships in the American sports car racing scene with both prototype and GT3 challengers.

If their track record is anything to go by, we’d wager that Acura will be back to take the top step next year. Regardless, the Pikes Peak International Hill Climb remains one of the longest-running motorsports events in America.