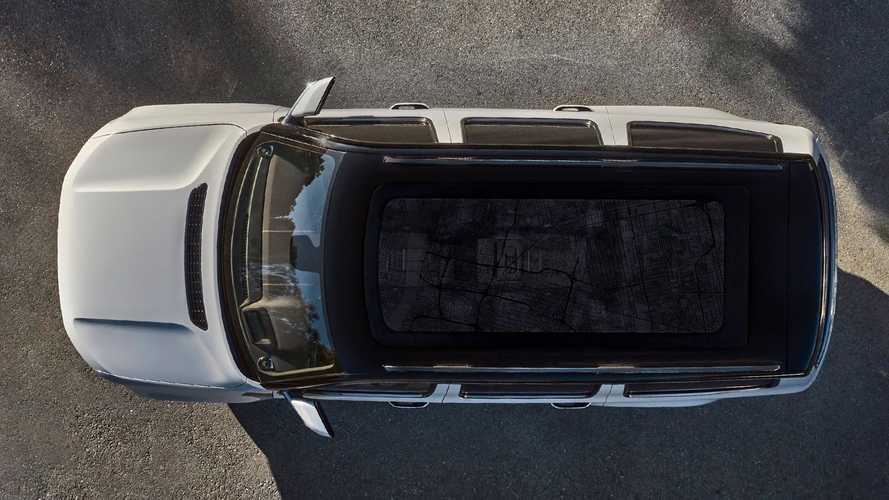 The details on the new Grand Wagoneer are impressive.

Mark your calendars: The new Jeep Grand Wagoneer debuts on September 3 (as a concept). When the production version of the new Jeep SUV eventually arrives, it will have three rows, off-road capabilities, and based on previous reporting, possibly a few different engine options. But until those details are confirmed, all we know about the new Grand Wagoneer is what we've seen in teasers – and the latest two could be the most telling.

Jeep tweeted out these two new images of the Grand Wagoneer concept earlier this morning. The first one (pictured below) shows a top-down view of the SUV, previewing a massive glass roof fixture with a unique mapping overlay. Upon further investigation, it appears to be a map of Detroit – or at least, a mirrored version of it. A few landmarks, like Belle Isle and Grand Circus Park, are noticeable in the image.

The second teaser image shows another unique design feature of the interior: the air vents. The chrome-finished fixtures apparently jut out from the dash and offer some sort of shelving area underneath it, from what we can see. There's also a silhouette of the Grand Wagoneer etched on the lateral side of the A/C vent with the phrase, "EST. 1963," in honor of the very first Jeep Grand Wagoneer.

So far, Jeep has sent out six teasers of the upcoming Grand Wagoneer. The first pair of images showed the new exterior wordmark with an American flag emblem, as well as the engine stop-start button in the cabin, draped in swathes of wood and leather. Then we saw the unique seven-slat grille, the chrome infotainment controller, and a shadowy image of the vehicle's front profile.

But we still haven't seen the new Jeep Grand Wagoneer concept in full. As mentioned, the debut will take place next week, Thursday, September 3 – but the production version probably won't go on sale until at least 2021.