An important Mercedes model is getting a makeover.

Mercedes recently updated its GLC-Class crossover, though the next-gen model isn’t too far behind. Spy photos of the automaker’s popular high-rider show significant changes are coming, but we won’t see them for a while. A new spy video shows the crossover testing on public roads, and it has yet to lose any camouflage, concealing many of the changes.

However, one thing the swirly coverings can’t hide is the vehicle’s size. It looks larger than the current model, though we won’t know its true size until Mercedes tells us, or info leaks. The smaller GLB offers three rows of seating for seven, so we wouldn’t be surprised if Mercedes did the same for the larger next-gen GLC. However, it appears to retain the current model’s shape.

Other changes to the design are harder to spot. Cladding at the front obscures the fascia’s shape. Non-production headlights flank the white mesh where the grille would be located. It’s the same at the rear with stand-in taillights and plenty of camouflage hiding any detail. Along the side, we can spot the side mirrors sitting lower on the body, moved down from the A-pillars. It also appears that the door handles have been moved much lower on the doors.

When the next-gen GLC arrives, it’ll ride on an updated version of the automaker’s Modular Rear Architecture that also underpins the revamped C-Class. The crossover is in its early stages of development, so there are few details about the powertrain, though we expect plenty of hybrids – from mild-hybrid setups to plug-in models. 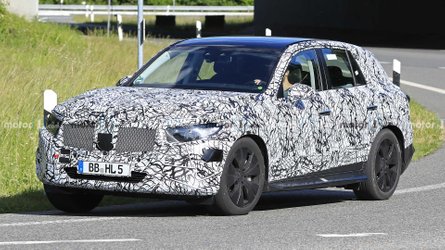 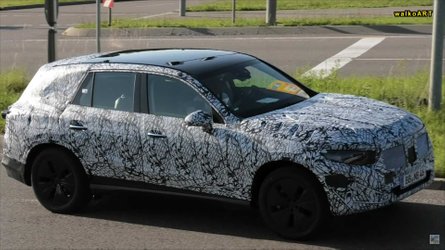 Mercedes just updated the GLC, so it’ll be a bit before we the new one. We don’t know when to expect a reveal, though it likely won’t arrive until at least 2022. Until then, expect tons of spy photos as development continues. Hopefully, it’ll eventually lose some of its coverings.