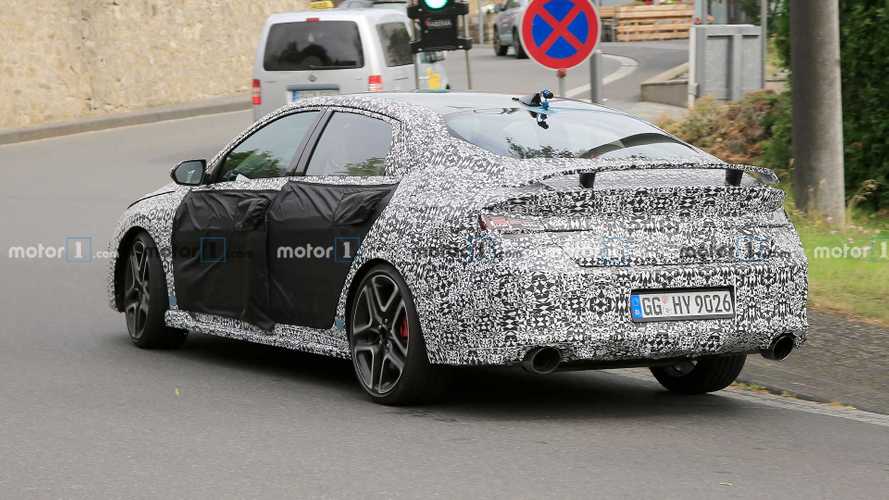 The performance sedan is rumored to pack 275 horsepower.

Rumors regarding a full-fat N version of Hyundai’s new Elantra emerged back in March, and today we’re bringing you the first batch of spy shots confirming the report was valid. The compact sedan received a warm N Line trim about two weeks ago and it appears the South Korean brand is already testing the upcoming range-topper on the streets of Germany.

You can easily tell this isn’t an old Elantra N Line prototype still carrying camouflage taking into consideration there are some obvious changes at the back. Gone is the subtle spoiler lip on the trunk lid as it had to make way for a prominent fixed rear wing. In addition, the dual exhaust tips on the right side of the bumper have been replaced by visibly larger exhaust finishers positioned to the left and right to enable a far more aggressive look.

It appears the wheels have been borrowed from the Veloster N and come with red brake calipers at both front and rear axles. We’re getting the feeling the car rides a smidge lower to the road than Hyundai’s Jetta GLI competitor, thus suggesting a stiffer suspension setup to improve handling.

Although the front fascia remains largely hidden under disguise, we’re noticing changes to the bumper as the air intakes are different than those of the Elantra N Line. They appear to be fairly small, but that might be because of the camouflage hiding the juicy bits.

While the N Line makes use of a turbocharged 1.6-liter gasoline engine, the beefier N is said to use a larger 2.0-liter unit. Power will allegedly increase from 201 hp to 275 hp and 353 Nm (260 lb-ft) to mirror the upcoming Kona N hot crossover and the existing i30 N and Veloster N. Hyundai is expected to sell the Elantra N with a six-speed manual transmission and an optional eight-speed, dual-clutch automatic it introduced recently in the Veloster N. As a refresher, the N Line sedan is also offered with three pedals and a DCT, but the latter has only seven gears.

Having just recently introduced the Elantra N Line, chances are we’ll have to wait at least a few months for Hyundai to unveil the N variant. If it’s coming to the United States, expect the feisty sedan to hit the market sometime next year as a 2022MY.