Even the base model will pack 429 horsepower.

As the world premiere set for September 2 approaches, more and more pieces of the 2021 S-Class puzzle become available. Mercedes has already revealed the all-new interior in full while talking quite a bit about the changes the W223 will bring to the table. Now, our colleagues at Motor Trend have learned straight from the three-pointed star about the engine lineup that will be available in the United States.

Mercedes will kick things off in North America with an S500 equipped with a turbocharged 3.0-liter inline-six engine rated at 429 horsepower. The entry-level model will be of the mild-hybrid variety as it will pack an extra 21 electrified horses courtesy of the EQ Boost setup. If these output numbers seem familiar, that’s because the electrified powertrain is offered in a variety of “53” models. The combustion engine pumps out 384 pound-feet (521 Newton-meters) of torque while the Integrated Starter-Generator" (ISG) bolted to the M256’s crankshaft is good for a remarkable 184 lb-ft (250 Nm).

Up next is the beefier S580 with a twin-turbo 4.0-liter V8 codenamed M176 and producing a healthy 496 horsepower along with an extra 20 hp via the aforementioned ISG. The torque delivered by this setup will stand at 516 lb-ft (700 Nm). Both these versions of the next S-Class will come as standard with 4Matic all-wheel drive.

The S580 will also earn an “e” at the end of its name to denote the plug-in hybrid version. Confusingly, it will drop the V8 for the inline-six installed in the S500 but detuned to 362 horsepower. The traditional engine will be paired with an electric motor pushing out 140 hp for a combined output of nearly 500 hp and the same torque as the regular S580 with its larger V8.

Here Are All The Juicy Details And Images: 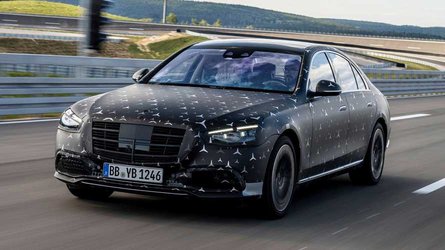 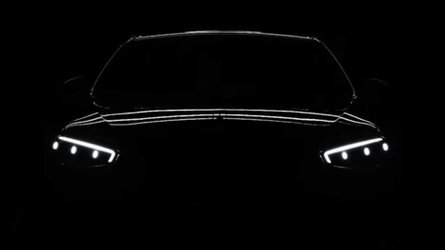 Thanks to a 28-kWh battery pack, the S580e is expected to cover up to 60 miles (96 kilometers) on electric power alone. As Motor Trend points out, that would represent more than double the range of the outgoing 2020 S560e. If you’re worried the battery will eat into the available cargo capacity, don’t be. Mercedes made efforts to install the rear axle lower in the body to fit the battery without hampering practicality. As a matter of fact, the trunk will be larger compared to the W222.

Further down the line, AMG versions will arrive with as much as 800 horsepower for a plug-in hybrid model. While there won’t be an AMG S65 this time around, the twin-turbo 6.0-liter V12 will still be available in the Maybach S-Class where it will work with an all-wheel-drive system for the first time.

Outside of the United States, Mercedes will also sell its revamped S-Class with a variety of diesel engines, including a 3.0-liter straight-six with 282 hp and 443 lb-ft (600 Nm). This will serve as the base unit in Europe, while China and other markets with huge taxes on large-displacement engines will even get a four-pot. In the People’s Republic, the CLS 260 is already offered with a turbocharged 1.5-liter gasoline engine rated at 184 hp and 207 lb-ft (280 Nm). In addition, a four-banger G350 is getting a 2.0-liter in China with 299 hp and 295 lb-ft (400 Nm).

The new S-Class is also getting a zero-emissions cousin in the EQS due to arrive in 2021 with swoopy exterior design and an avant-garde cabin. The S-Class of electric vehicles will travel more than 435 miles (700 kilometers) between charges, thus matching the stunning namesake concept unveiled nearly a year ago at the Frankfurt Motor Show.