There's all kinds of Shelby DNA under the bodywork, too.

Let’s be honest. Ford Mustangs are as common in America as baseball fields and apple pie. As such, you’ll find gobs customized ‘Stangs that strive to stand out in a crowd. However, unless your name happens to be Ken Block, we don’t think you’ll ever see a Mustang as radically awesome as this one.

On the outside, it looks like a first-generation 1965 Mustang. It was built by Mark Stevens, who also enjoys a bit of off-road action as a Baja racer. Stevens competed in the 2018 event, and we suspect he understands very clearly just how important suspension components are in racing applications. Having gobs of power under the hood means nothing if you can’t get it to the ground, right?

That’s why we say this is a 1965 Mustang on the outside. Things are much newer underneath, not the least of which being the front and rear subframes from a current-generation Shelby GT350. Power is also current-generation in the form of a 5.0-liter Coyote V8, and shifting is done with paddles on a 10-speed automatic. It has upgraded suspension, brakes, all kinds of racing gear, and since Stevens has Baja experience, there’s even a touch of trophy truck in this bonkers build. It’s also filled with custom fabricated parts, and before you ask, no you can’t buy one. According to Stevens, it’s just too involved to make it a bolt-up kit. 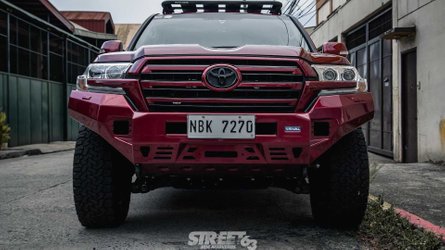 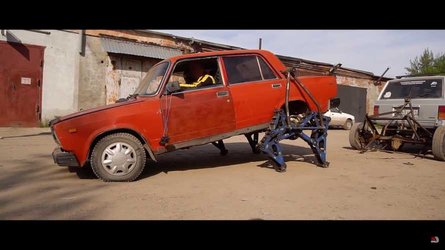 Crazy Lada With Working Legs Proves You Haven't Seen Everything Yet

It’s not just a case study in Baja tech for autocrossing, either. Our friends at Muscle Cars & Trucks happened upon Stevens and his mental Mustang while at an SCCA event in Northern Lower Michigan. We don’t know how well the car performed that day, but judging by the plethora of vehicle photos included with the original MC&T article, we’d say the car is more than capable of conquering a tight autocross course with extreme haste.

Check out the full story of this build and nearly 30 photos at the source link below. Special thanks to MC&T for sharing a few shots with us. It’s definitely a Mustang to remember.