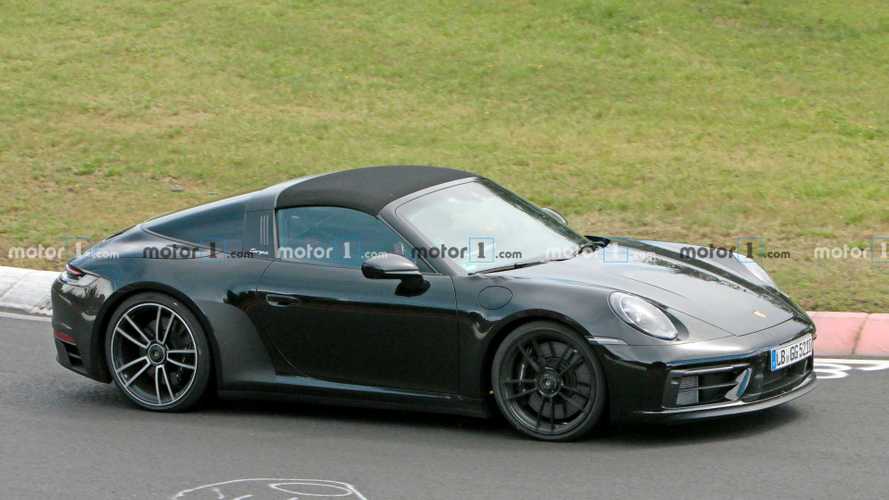 Does this mean the official reveal is finally nigh?

It’s possible that, in an alternate timeline, the Porsche 911 GTS has already been revealed. That would likely be a timeline where COVID-19 didn’t happen, or perhaps a timeline where Porsche doesn't drag things out quite as long. The new 992 GTS has indeed been a long time coming, and it’s possible this Targa version could take even longer.

That’s unfortunate, because we suspect the car doesn’t take long at all to turn a lap at the Nürburgring. We have two sets of fresh spy shots from the Green Hell, one catching the car outside the track and the other nabbing the removable-roof sports car carving up the Nordschleife.

Both sets of photos show pretty much the same thing, namely the small changes on the front and rear fascia that set the GTS apart from the Carrera. Look close and you’ll see the lower vents are slightly different on both fascias, and when we see versions that aren’t Prototype Black, you should see more black trim for cars with color.

It all part of the spiced-up GTS formula, slotting between the Carrera and Turbo. As such, the 3.0-liter engine should also gain a slight-but-noticeable power increase, with some rumors pushing the turbocharged mill towards 470 horsepower (350 kilowatts) before all is said and done. As for the roof, the removable Targa top debuted on the Carrera some time ago and we spent considerable time behind the wheel. It could well be the best open-air Porsche experience you can have today, so adding a bit more power with a GTS sounds positively sublime.

Porsche 911 GTS Spied In Eye-Catching Green With No Camouflage

The big question now is, how long must we continue to wait? Previous spy shots and rumors pointed to a spring 2020 debut but that was likely postponed due to coronavirus. The test car spotted here wears no obvious camouflage, which usually means an official reveal is right around the corner. We are now hearing reports it could happen in the fall, or as late as next spring. Either way, it can’t get here soon enough as far as we’re concerned.