2021 Ram TRX Without The Hellcat Engine? 'Not At Introduction' 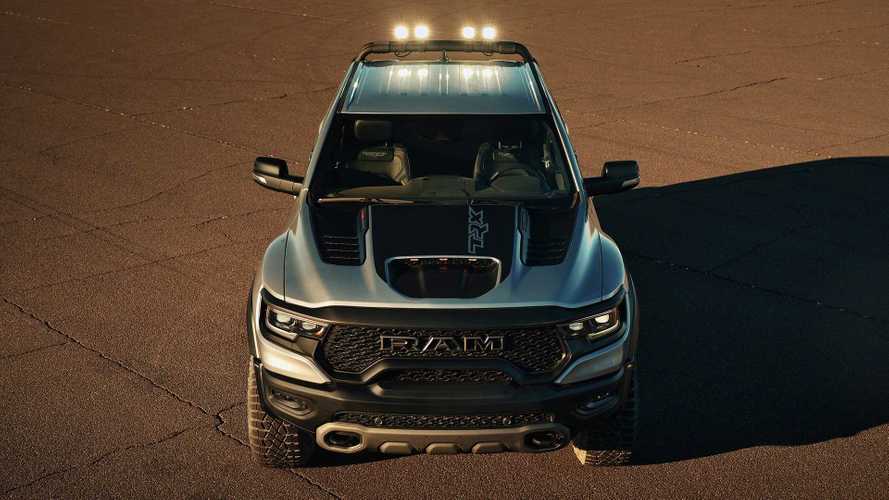 Ram isn't saying no to a lesser TRX, but it's not saying yes either.

The long-awaited 2021 Ram 1500 TRX is aimed squarely at the Ford F-150 Raptor, but some would argue these two performance trucks are not direct rivals. One solid argument would have to be the price gap of $16,540 when comparing the base versions as the Ram is a lot more expensive, even reaching six figures in fully loaded form. Then there’s a major power difference considering the TRX has an extra 252 hp and 140 lb-ft (190 Nm) of torque over the Blue Oval’s speedy pickup.

This brings up a valid question – Will Ram come out with a lesser 1500 TRX sans the Hellcat engine for a lower asking price to fully rival the Raptor? Automobile Magazine asked that question to the company’s officials and they didn’t necessarily rule out that possibility, saying “not at introduction.” This somewhat vague answer leaves the door a bit open for a more attainable variant, which AM speculates could go by the name of TRX Sport.

There are arguments for and against a TRX without the bonkers 702-horsepower supercharged V8. A naturally aspirated version would indeed bring the asking price lower, but at the same time, there’s a risk it could dilute what TRX stands for.

SRT Version Could Be Coming Soon:

On the other hand, Ram has poured a significant amount of money into the ultimate 1500 and is certainly interested in the truck’s return of investment. Offering a “lite” version with a more down-to-earth engine already offered in other FCA products would lure in more buyers. Consequently, it would help the company better spread out the development costs of what is otherwise an expensive and niche product.

There’s also the F-150 Raptor to think about considering Ford is putting the finishing touches on the new one. A spicy rumor pointed towards the return of the V8, namely a supercharged 5.2-liter from the Shelby Mustang GT500 good for 700 horses. That would take aim directly at the TRX, but a recent spy video of the new Raptor seemed to have a V6 soundtrack.

2021 Ram TRX Vs Ford Raptor: Which Truck Is Toughest?

In both cases, we’ll just have to wait and see whether Ram will launch a watered-down TRX and/or if Ford has plans for an amped-up F-150 Raptor. One thing is for sure – the muscle trucks of the 1990s are back with more power and greater off-road chops.