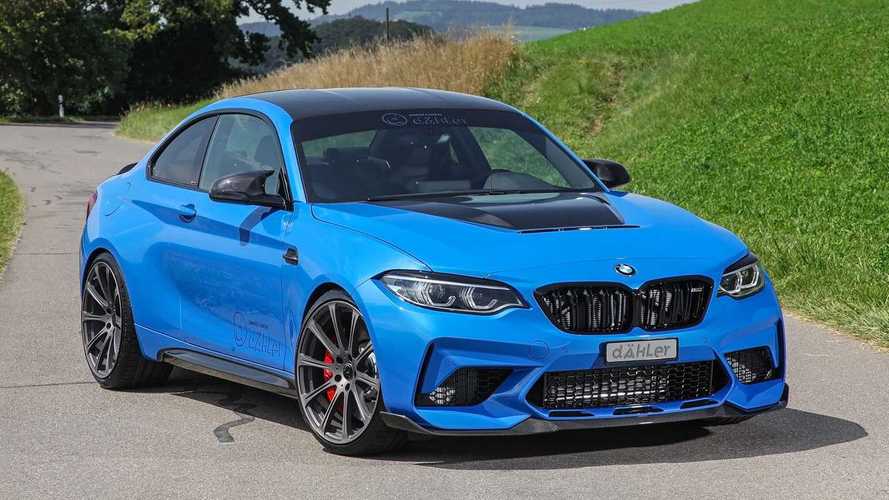 There are two levels of tune.

Swiss tuner Dähler gets ahold of the BMW M2 CS and tunes the performance coupe to be part of the company's Competition Line. The result of this work is very impressive.

There's also the Stage 2 modification with 543 hp (405 kW) and 545 lb-ft (740 Nm). This level also completely removes the top speed limiter. However, this setup is not emissions legal in the European Union or Switzerland, so Dähler only offers it on export vehicles.

To achieve these numbers, Dähler uses an Eventuri carbon fiber intake with homologation to match European noise regulations. The name comes from the enclosed housing that allegedly takes advantage of the Venturi effect to increase performance.

Dähler also adds a stainless steel exhaust of its own design. Buyers can select between 3.54- or 3.9-inch (90- or 100-millimeter) diameter tailpipes.

The vehicle rides on 20-inch wheels with V-shaped spokes. Customers can choose between an aluminum or gold (our preference) finish for them.

Inside, Dähler knows that many of its buyers want to hit the track. It offers a rollbar and racing seats suitable for track day use.

In the United States, the first units of the M2 CS should arrive before the end of the year. If you want one, then you need to act fast because BMW only plans on bringing around 400 units to the US.

The circle of the «dÄHLer M2 story» closes: with the M2 CS «DCL dÄHLer competition line».

If a vehicle bears the addition "Clubsport" ex works, then it can already be driven extremely sporty. This also applies to the Königs-2series, the BMW M2 CS, which is consistently designed for high performance and use on the race track in every detail. If this Clubsport vehicle is now launched as the «DCL dÄHLer competition line», because there is still plenty of potential for optimization in the CS, it is simply the icing on the cake.

dÄHLer knows the engine (S55) installed ex works in the M2 CS inside out. Already at the start of the M2 journey in 2016, the company from Belp near Bern in Switzerland - probably the first company to do so - transplanted the M4 engine into the M2 Coupé and subjected it to an additional performance cure back then. This was also the time when dÄHLer installed the carbon-ceramic brake now used in the M2 CS in the M2 of 2016 and put the first M2 Cabrio on wheels!

Now the circle is complete: dÄHLers up-to-the-minute M2-CS interpretation brings the «dÄHLer M2 story» to a brilliant conclusion and thus the "icing on the cake" for its own M2 conversions:

The complete conversion package with performance increase in combination with Eventuri intake system and the stainless steel complete exhaust system is available for the version with the manual 6-speed transmission or the 7-speed DKG. As a worldwide premiere, this sum of all conversion parts is WLTP-E6d-temp tested and EU-/CH-homologated!

• EVENTURI Intake System: The worldwide available and sought-after EVENTURI Carbon Intake Systems have been homologated by dÄHLer according to the latest sound and noise regulations EU-/CH-homologated and can be legally installed and approved with or without performance increase. The Eventuri Carbon Intake System was developed to increase engine performance. By means of an inverted conical filter, enclosed in a carbon/kevlar housing, EVENTURI makes use of the so-called Venturi effect. This results in a uniform laminar airflow, which not only increases performance but also improves response and creates a new unique sound experience.

• 4-pipe stainless steel exhaust system (front and rear silencer) «built by dÄHLer» with the sporty and sonorous sound typical of dÄHLer. The exhaust system is also a visual treat as it is not visible from the rear, but not only: it is a completely new dÄHLer development for the two M2 models Competition and CS. The rear silencer can be combined with the standard tailpipes or optionally the dÄHLer tailpipes with 90 or 100 mm diameter.

• Specifically and carefully tuned to the vehicle - Clubsport coilover suspension «built by dÄHLer» for a further increase in agility. Or, on request, if only an optical upgrade and lowering is required, a harmonious sports spring set «powered by dÄHLer», which is explicitly based on the "Electronic damper system EDC" is adjusted.

• Visual treat: Ultralight 20-inch forged wheel «dÄHLer CDC1 FORGED» with Michelin tyres - the sporty and
elegant wheel from our own development and production, in the dimensions 9 x 20 (FA) and 10.5 x 20 (RA), available in many different colors.

• 20-inch alloy wheel «dÄHLer CDC1» with Michelin tyres - the sporty and elegant wheel from our own development and production, in the dimensions 9 x 20 (FA) and 10.5 x 20 (RA), in many different versions.

• Interior, up to the «DRL dÄHLer race line», with roll bar, racing seats etc. for clubsport or trackday use.

Dähler could tell an entire novel about the hobbyhorse "M2", like about all the other M models, but its much easier this way: call, make an appointment, optimize, drive off and EXPERIENCE. True to the motto: Power, performance & pure fun. With the M2 CS «DCL dÄHLer competition line», which has been coordinated and optimized as a desirable overall package, you can feel the technological competence and harmony and enjoy the extremely sporty feeling - simply a round thing!