This AMG GT Black Series Could Go After The Nürburgring Record 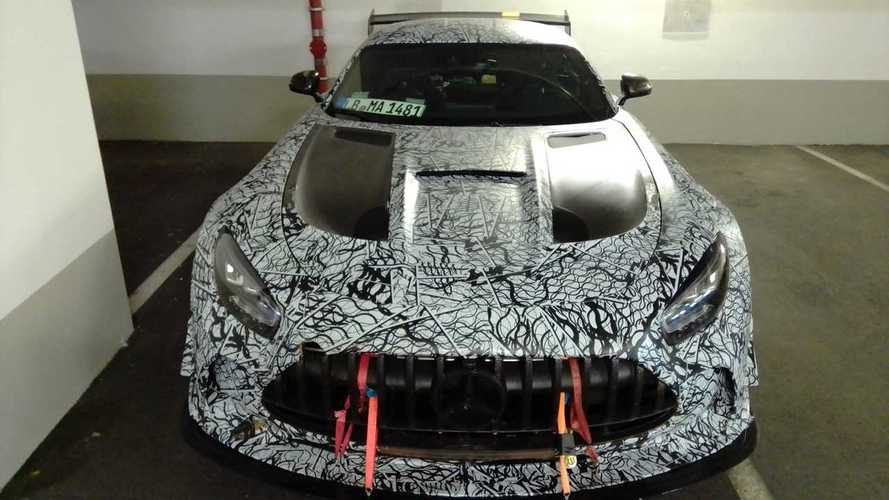 Rumors say AMG is still tweaking the aero and might add more power.

The Mercedes-AMG GT Black Series was officially revealed exactly a month ago, so you might be wondering why this prototype is still draped in camouflage. That’s a good question, and Nürburgring taxi service Fastabast Taxi Experience claims to know the answer. If the company’s name rings a bell, that’s because it was right on the money regarding the engine’s output a week before the car celebrated its world premiere.

It is believed Mercedes-AMG is attempting to set a new lap record at the Nürburgring for the fastest production car. During the final stages of development, a prototype of the Black Series reportedly lapped the Green Hell in 6 minutes and 58 seconds. However, the boys and girls from Affalterbach were not entirely satisfied with the performance and continued to fine-tune the car.

This brings us up to these spy shots taken in a parking garage by Fastabast. The revised front splitter is reportedly part of a new aero package AMG has been working on to shave off more seconds from the lap time. Allegedly, the Black Series lapped the Nordschleife in approximately 6 minutes and 40 seconds, although we remain skeptical as an improvement of 18 seconds would be massive.

Interestingly, the flat-plane-crank V8 4.0-liter twin-turbo engine has also been massaged to extract anywhere between 120 to 150 horsepower, which would bring the grand total to 850 hp. If the claimed 6:40 time is accurate, the Black Series will be crowned the fastest-ever production car at the Nürburgring, thus dethroning the Lamborghini Aventador SVJ (6:44.97).

To earn the title for a production car, Mercedes-AMG would have to sell this specification of the Black Series in some form. It remains to be seen whether this is all happening, but given the track-focused nature of the ultimate GT, a lap attempt with the regular model seems plausible at the very least. If it’s not on the agenda, it would make sense for the F1-engined One hypercar to try and obliterate the production car record.