This video took a while to come out.

For some reason, comparisons between the Ford Mustang Shelby GT500 and the Chevy Corvette C8 have been popping out ever since the start of this year. We've seen drag races and circuit battles between these two high-powered American sports cars before. That's despite the fact the Mustang competes squarely with the Camaro.

One of the hottest (and controversial) comparisons between the GT500 and C8 came out early in the year. Motor Trend's Randy Pobst published a story comparing the track performance of a Shelby GT500 with Carbon Fiber Track Pack and a Corvette Stingray 3LT with Z51 Performance Package – but without publishing the lap times or a video to support the claim.

Alas, the video of that Motor Trend comparison has been uploaded on YouTube. It may be several months late but as they say, better late than never. And yes, we know that this is an apples-to-oranges comparison, but a notable one anyway if you're in the market for a sports car within their price range.

As seen on the video that we embedded on top, the Shelby GT500, with its supercharged V8 and massive horsepower gap, was faster on straights, lording over the Corvette by as much as 20 miles per hour. However, the C8's weight advantage allowed it to be faster on corners. 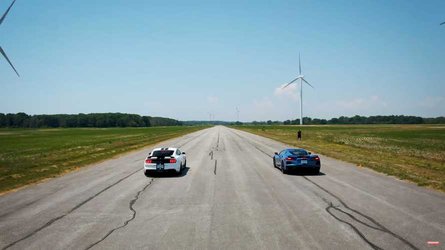 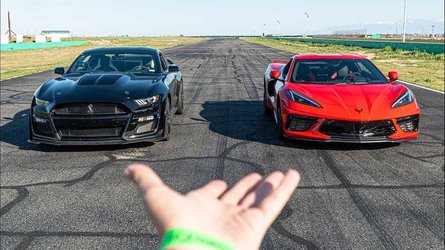 Same driver, same circuit (Virginia International Raceway), both seemingly fun. The most powerful stock Mustang finished with 01:59.68 lap time, while the base Corvette Stingray clocked in 02:00.96 – a full second win for the Cobra-badged 'Stang.

Of note, considering the output leverage of the Shelby, that small difference seems to be a relative win for the Corvette. Imagine this race with the Z06 or ZR1, or even the C8.R, and we all know what the end result would be.

But then again, an apples-to-oranges comparison, nonetheless.