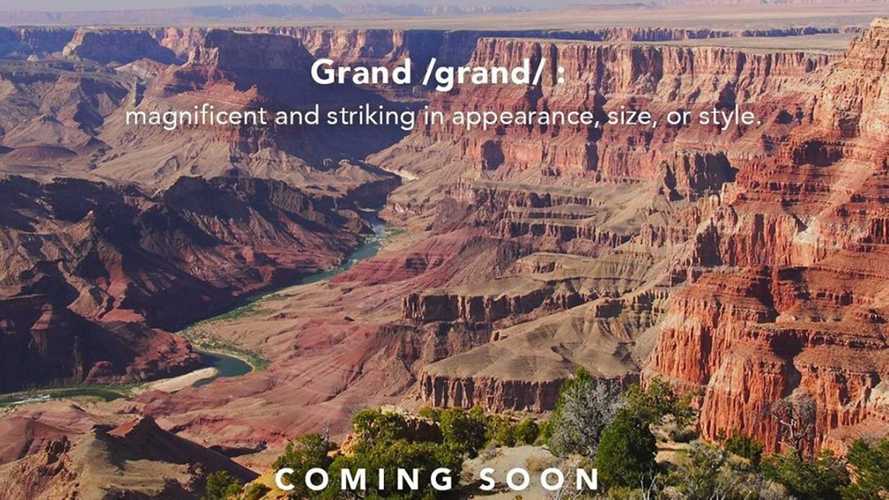 Or is it the Grand Cherokee?

A teaser image that shows absolutely nothing about the vehicle is a bit annoying, but we’re glad Jeep is finally getting ready to introduce the Grand Wagoneer. The adjacent photo explaining the meaning of the word “grand” has been shared on the company’s social media channels, signaling a new “Grand” model is coming soon.

While it doesn’t necessarily mean Jeep is indirectly teasing the Grand Wagoneer, we’re tempted to believe this is the model in question rather than the next-generation Grand Cherokee. The fullsize SUV has been a long time coming taking into account Jeep first announced it more than two years ago with a product roadmap through 2022 that also included a Wagoneer and a new three-row SUV positioned between the next Grand Cherokee and the Wagoneer.

How soon is “soon”? We’ll likely have to wait a few more weeks to learn about the Grand Wagoneer, but we do know when production is scheduled to start. According to a recently published FCA document, the model will enter production in the second quarter of 2021 when the regular Wagoneer is also set to hit the assembly line. These will follow the aforementioned three-row SUV bound to enter production in Q1 2021, while the new Grand Cherokee's SOP is programmed for Q3 2021.

Likely riding on the same platform as the Ram 1500, the large-and-in-charge SUV is said to become the most sophisticated product in FCA’s portfolio. It’ll reportedly offer a frameless 12-inch touchscreen, a head-up display, a rear-seat entertainment system, and feature premium materials throughout the interior.

It's Finally Coming Back:

The latest intel suggests the Grand Wagoneer will boast a level 3 semi-autonomous driving system and a plug-in hybrid variant with approximately 30 miles (48 kilometers) of electric range. Considering it’ll likely utilize the Ram 1500’s body-on-frame underpinnings, expect the powertrains to be borrowed from the pickup truck. Rear- and all-wheel drive setups are on the menu, along with an eight-speed ZF automatic transmission.

In regards to exterior styling, we wouldn’t hold our breath for a retro-flavored design like Ford has done with the new Bronco as the Grand Wagoneer is said to look like a fancier 2022 Grand Cherokee. In other words, wood paneling to harken back to the old model is probably not on the agenda.

Now that Jeep has officially started the teaser campaign, we’re expecting to learn more about the Grand Wagoneer in the coming weeks and months.