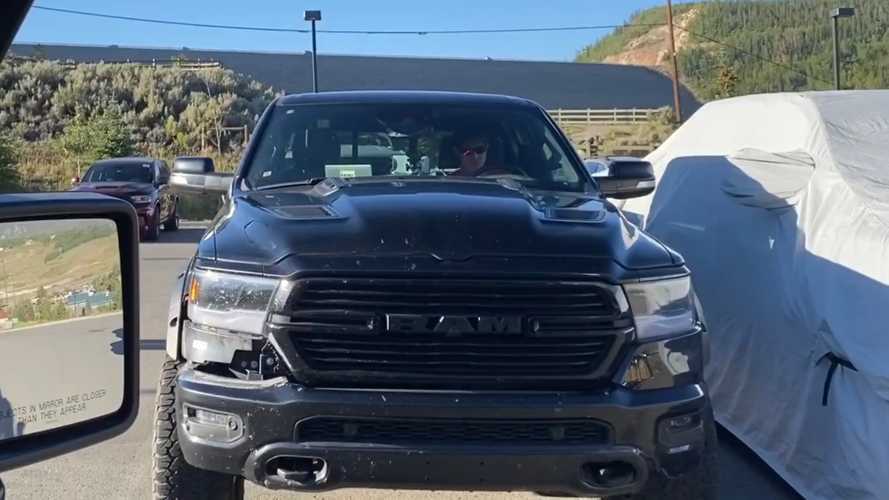 This is our best look yet at the Ford Raptor competitor.

The Ford Raptor celebrates its 10th birthday this year, going a decade unchallenged by any other make and model. That’ll change as 2020 comes to a close when Ram begins production of the 2021 Rebel TRX. Ram’s rugged Raptor competitor emerged as a concept in 2016, igniting hopes it’d see production. Photos and videos of camouflaged prototypes have emerged, but a new video shows one TRX test vehicle with little covering.

The video doesn’t show much – it’s shot from a moving vehicle – but it does show off the truck’s front end and a portion of the profile uncovered. The front doesn’t take us by surprise. It features a typical Ram grille accented by wider finders and gray bolted-on wheel arches. The bumper looks new with a pair of tow hooks protruding. The hood features a massive bulge flanked by vents.

The hood likely hides the supercharged 6.2-liter V8 from Dodge’s Hellcat models. Rumors continue to suggest it’ll be one of several engines offered in the pickup. The 5.7-liter Hemi V8 and the 3.6-liter V6 could be possibilities, which will all Ram the ability to offer affordable TRX models. However, audiences will center their attention on the Hellcat-powered model as the pinnacle of the TRX’s performance, and it shouldn’t disappoint, possibly making 707, 717, or 797 horsepower (527, 534, or 594 kilowatts). The 797 figure is doubtful, though.

The parting profile shot shows a slab-sided pickup with plastic fender arches. It lacks the beefy bedsides of the concept, though there’s a solid chance this Ram isn’t wearing its production clothes. We’ll know soon what it looks like, and what power plants lie under the hood. Ram has already announced the TRX will receive a summer reveal, and production is scheduled to begin in Q4 2020, which starts less than two months from now. The Raptor’s second decade will be much different than its first.