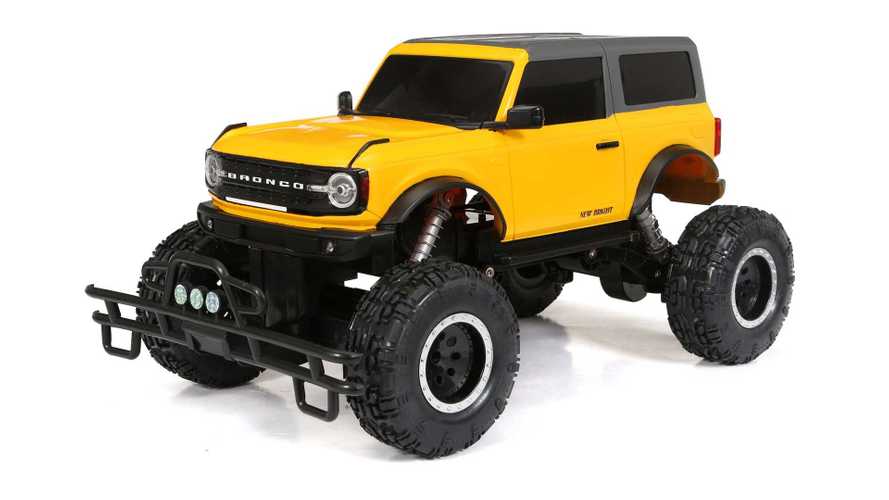 The not-so-miniature remote-control SUV is 22 inches long and all sold out.

The 2021 Ford Bronco is still several months away from arriving at dealers, and with more than 200,000 reservations amassed, folks could be waiting a long time to get their hands on the SUV. Unfortunately, the same might even be true of this New Bright Bronco R/C, rendered in 1:8-scale and measuring 22 inches long in total. Priced at $69.97 from Walmart, the toy is sold out nationwide.

One Bronco fan was able to nab one and was kind enough to upload a video to the “Ford Bronco 2021” fan page on Facebook, sharing running footage with the group’s 26,000-plus members. It’s clear that the New Bright example is more of a fun plaything than a serious radio-control car, but it has no trouble tearing up and down its owner’s gravel side yard. Rendered a gleaming Cyber Orange, the Ford Bronco R/C has bodywork that’s actually pretty faithful to the real-life two-door model.

Of course, New Bright has its way with the remote-control SUV’s suspension and rolling stock, treating it to a fairly massive lift, long-travel springs on simple pushrods, and a rigid underframe. If you want a Bronco with solid front and rear axles, this is one rather cheap way to do it. It’s also pretty huge, at 22.8 inches long by 11.5 inches high by 12.3 inches wide. Running on a 2.4-gigahertz frequency and with an available smartphone app connection, New Bright says up to five Broncos can race side-by-side free of any interference.

Those interested in buying one had better sign up for Walmart’s email restocking alerts or get used to refreshing the product page regularly. There’s no telling when the New Bright Ford Bronco will reappear on store shelves or how long it will last when it does, but given the high anticipation for the “real thing,” the big little R/C might be in nearly as much demand.