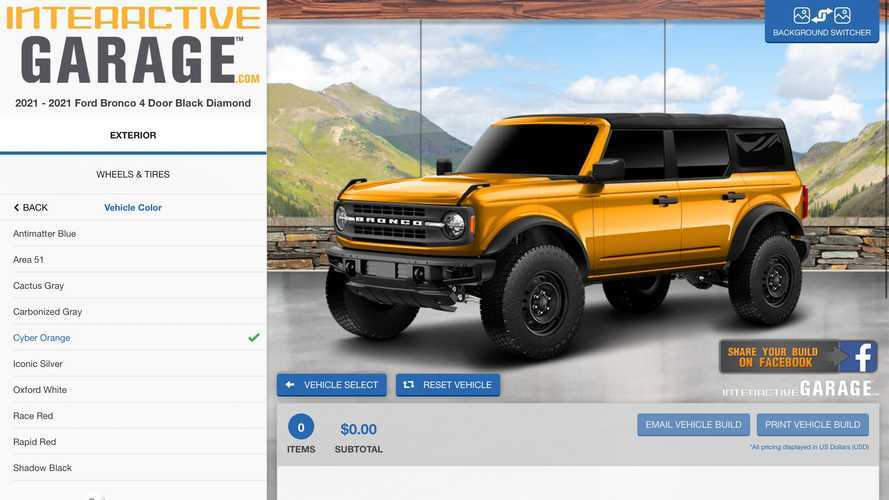 You can even check out how aftermarket parts and accessories look, too.

The official Ford Bronco online configurator won't be available until September, even though the Blue Oval is already accepting preorders with a $100 deposit. Until then, though, Bronco fans won't be left completely unoccupied. Interactive Garage has its Bronco configurator up and running, and it's a surprisingly comprehensive one, too.

Interactive Garage allows you to choose between the two- or four-door Bronco in the soft- or hard-top roof while offering the complete palette of colors. It also lets you pick the trim – Badlands, Big Bend, Outer Banks, First Edition, and the rest. However, it's not a complete configurator. It doesn't list any official Ford packages or any of the Ford-backed accessories. Then again, we're not sure if or how Ford will integrate those accessories into the configurator.

However, Interactive Garage does more than just let people play around at building a Bronco. The site also allows you to configure an assortment of aftermarket parts from different suppliers and brands for various makes and models, including the Jeep Wrangler. For the Bronco, these include new bumpers and side steps, exterior lighting options, suspension lifts, and an assortment of wheel and tire packages that should please any off-road enthusiasts.

Be Sure To Read More Bronco News:

The site even estimates the extra parts' prices, and it's a reminder of how expensive the SUV could get. The base Bronco starts at $28,500 for the two-door version and $33,200 for the four-door. Ford will offer it with plenty of packages and options with over 200 factory-backed accessories available at launch, which the customer will be able to roll into the purchase price.

Right now, everything points to Ford having a massive winner on its hands. There's an estimated 230,000 reservations for the new Bronco already, which is not a surprise considering some customers will be waiting 18 months after production begins until their preordered Bronco arrives.