Infiniti will host a livestream on November 11 to reveal the swoopy crossover.

The 2021 Infiniti QX55, the brand’s first foray into the “crossover coupe” segment since the death of the QX70 née FX in 2017, will take its first bow on November 11 via livestream. Infiniti calls the QX55 a “return to the luxury crossover coupe segment it created almost two decades ago,” claiming that the FX was the first of its kind.

As its name suggests, the QX55 should use the underpinnings as the QX50 small crossover, doing battle with the likes of the BMW X4 and Mercedes-Benz GLC Coupe. We’ve seen the vehicle in person but are still sworn to secrecy; however, it pays homage to that old FX with a handsome, arching roofline and a little ducktail spoiler, both of which are just barely visible in the teaser image Infiniti released. We can also tell you that its proportions are very well sorted, avoiding some of the hunchbacked awkwardness that plagues other crossover coupes.

Infiniti is still mum on QX55 powertrain details, but we can somewhat safely presume it will borrow the variable-compression turbocharged 2.0-liter inline-four found in the QX50, where it makes 268 horsepower (200 kilowatts) and 280 pound-feet (380 newton-meters). We also expect a continuously variable transmission and standard front-wheel or available all-wheel drive. That said, since the sporting 2021 QX55 is intended to be a bit more emotional, Infiniti might see fit to make all-wheel drive standard, possibly offering a hotter version of the engine as well.

As a coupe version of the QX50, the QX55 raises the question of whether Infiniti is planning a lineup of fastback SUVs. A midsize QX65 (based on the next-generation QX60) would make sense, particularly since it's been rumored that Infiniti may go front-drive–only for cost-cutting reasons. If that gossip turns out to be untrue, then we'd love to see a properly sporty QX70 return to the lineup, based on the Q50 sedan's rear-drive platform. 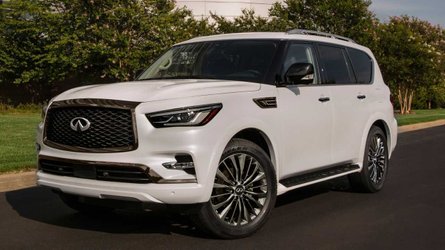 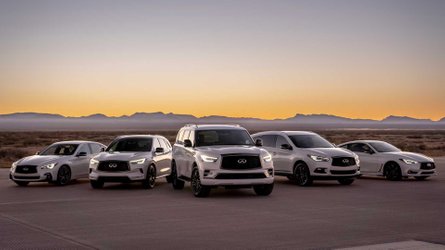 It’s unclear if and when the automaker will show the 2021 QX55 off in person. The 2020 Los Angeles Auto Show has yet to be officially postponed, so it’s possible we’ll get a look at it then. But with other major events like the Pebble Beach Concours d’Elegance and CES 2021 cancelled or delayed, we aren’t counting on LA happening.