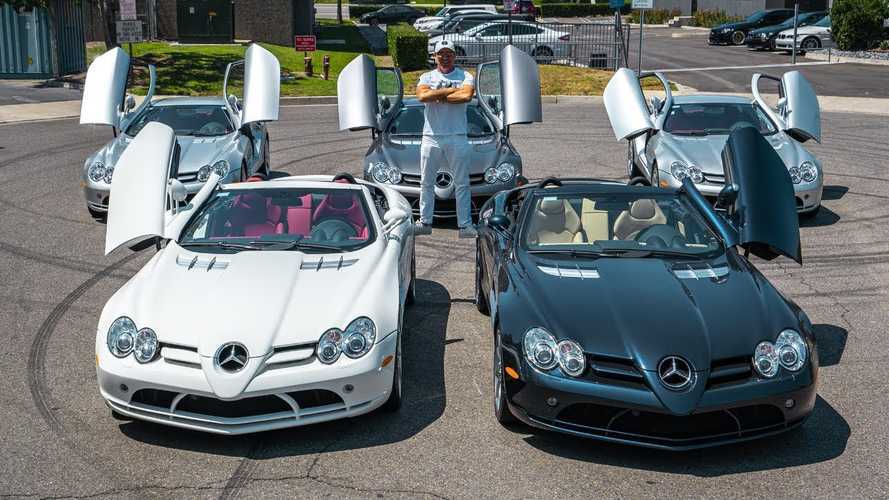 While Manny Khoshbin is well known for his grandiose car collection, it’s clear that he has a soft spot for certain manufacturers and vehicles. One of these candidates is the Mercedes-Benz SLR McLaren, of which he owns five. In his latest video, he takes his prized SLRs for a drive.

For the uninitiated, Khoshbin is a California real estate mogul and car enthusiast who has utilized his success to fund his auto addiction. Apart from his collection of Mercedes McLarens, he also has ownership of four Bugattis and many other vehicles you probably had on your bedroom wall as a kid.

Of the five SLR supercars that he owns, two of them are roadsters and the other three are coupes. Even with such a collection, his favorite SLR is the white convertible. Not only is it his preferred color, but it also features his ideal interior spec with red seats and carbon fiber trim. We’d also venture to guess the convertible top adds to the theater associated with the supercar’s V8 singing its song.

After moving a droptop Rolls-Royce out of the way, he gained access to one of his SLRs. Khoshbin was excited to show off his favorite feature of the car: the start button, hidden under a flap on the shifter as if it was made to launch a missile.

Bugatti Owner Explains Why He Has Three Of Them
⠀

“15-year-old technology, but still exhilarating,” says Khoshbin as he whizzes down the California streets. At first glance, the SLR has aged really well. Apart from the performance, for a vehicle that is around 15 years old, it still looks at home even while sitting next to the other vehicles in Khoshbin’s fleet. One of the only components showing their age was the hydraulics for the SLR’s gullwing doors.

While we love Khosbhin’s perpetual excitement for his supercars, let us know what you think of his SLR collection in the comments below.