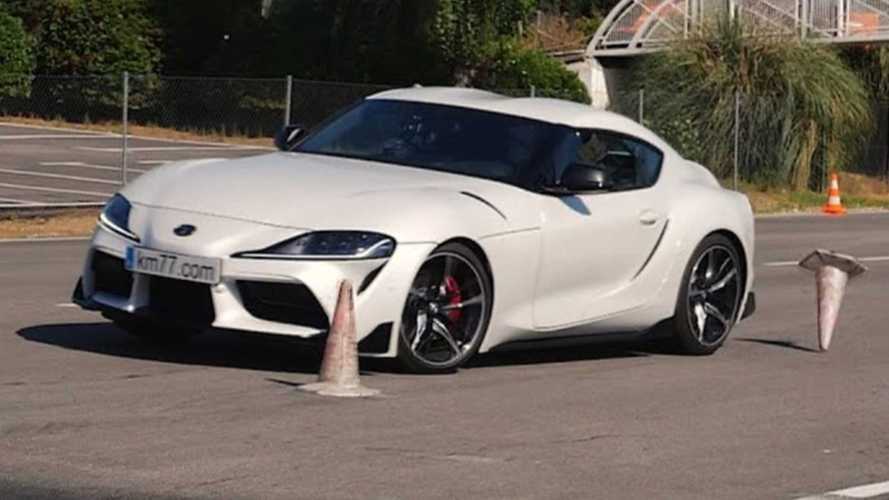 Watch out! A moose just walked into the road in front of your new Toyota Supra. Can you swerve around it? Based on a new test in Spain the answer is a strong "maybe."

The moose test challenges a vehicle's ability to avoid an obstacle in a fairly short distance and while traveling at a rather high rate of speed. The cones limit the automobile into making this maneuver into a narrow area.

The Supra successfully completes the moose test at 48 miles per hour (77 kilometers per hour). However, the tester notes that the Toyota Supra takes some practice to pass the challenge. The model's variable-ratio power steering makes it difficult to dial in the right amount of input. A person needs to be familiar with how this tech affects the car's handling to avoid hitting a moose.

The Supra failed other runs at 48 mph. It also wasn't able to complete the test at higher speeds. As the velocities increased, there was more tire skidding, which prevented the Toyota from getting around the cones.

The Supra also goes through a slalom in this video. Like the moose test, a grader would probably give the car a B+. The testers praise the vehicle's nimbleness through the cones. However, they deride the steering feel as being numb, particularly for a performance coupe.

Rumors About The Supra's Future:

This test concerns the Supra with the 3.0-liter turbocharged inline-six engine. We would be curious to see how the coupe performs with the 2.0-liter turbocharged four-cylinder. While the engine makes less power, this version weighs around 200 pounds (91 kilograms) less than the six-cylinder model. However, the four-pot variant also lacks the active differential and adaptive suspension that help the heavier machine.