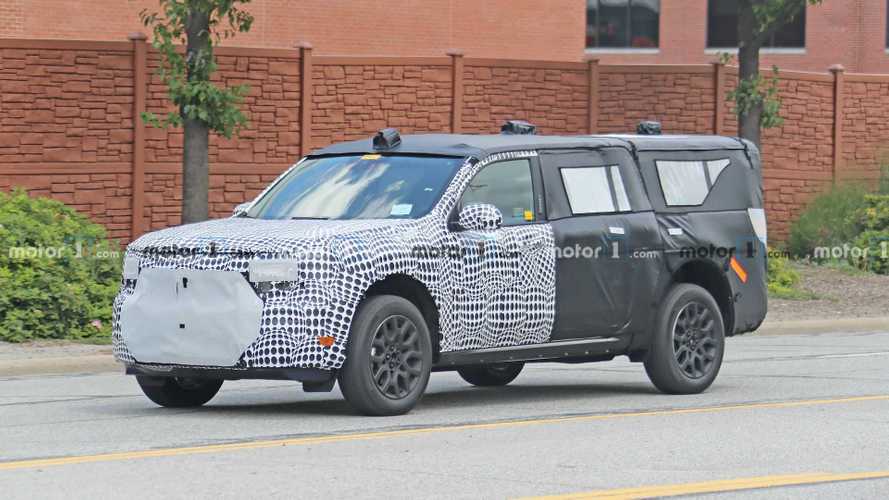 Or could this be the Maverick?

Ford isn't about to take a break after the widely-anticipated debut of the Bronco SUV. As with other automakers, the Blue Oval took a hit from the coronavirus pandemic and the best way to curb the losses is to stimulate the market by introducing new models.

The Maverick compact pickup truck is one of the upcoming models and there have been several reports about it, including a leaked photo of its tailgate sent to Motor1 by an anonymous source.

This time, however, a mysterious Ford SUV was spotted by our spy photographers driving around Dearborn. More importantly, the heavily-camouflaged prototype seems to be a three-row SUV, according to our spies. It was spotted leaving Ford's development center.

Ford has done a great job in concealing the prototype, leaving no clues for us to ponder upon. One thing we've noticed, though, is the squared-off rear and long overhangs, which could also point us into thinking that this is the Maverick pickup. While the rear overhang isn't long enough for a Ranger cargo bed, the Maverick is expected to have a bed that's shorter by two feet, according to an insider report. This bodes well with the prototype spotted above.

The Return Of The Maverick:

The spied prototype could be anything, really. Our spy photographers maybe correct, which means there will be another three-row SUV coming out of Dearborn. Currently, there are two three-row SUVs in the Blue Oval U.S. lineup, which are the Expedition and Explorer. Adding a third one won't be a far-fetched idea.

Now, if this is indeed the Maverick, the timing's just right as the compact, Escape-based truck is scheduled to debut by 2021.

We'll know more about this new Ford model coming our way. And as always, we'll keep an eye out for any recent development.