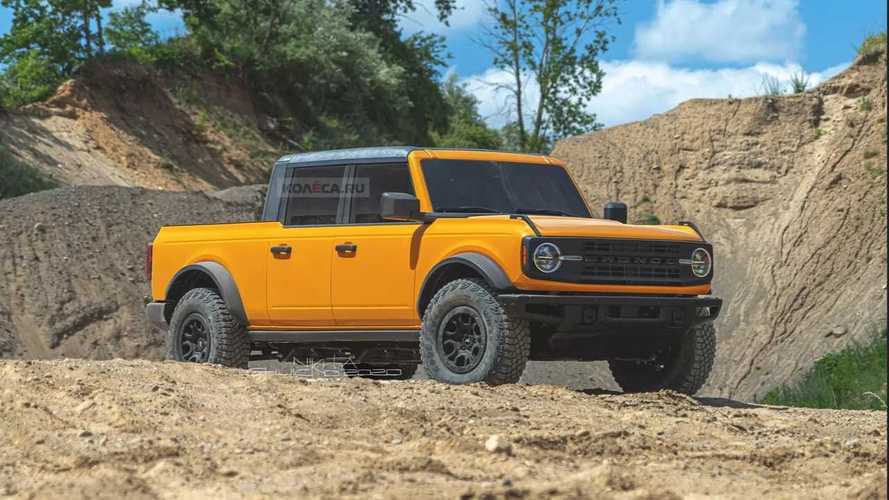 It also questions the need for a Ford Ranger in America.

Ford’s best-selling vehicle – by a wide margin – is the F-Series pickup. From 2012 through 2019 it was the only Ford truck you could get in America, and during that time it sold in record numbers. Now we have the midsize Ranger, and next year will come the compact Maverick. Could there be room in Ford’s lineup for another truck?

We recently covered a rumor that suggested the answer was yes, and it would be based on the new Bronco. To help visualize such a creation, we have a fresh rendering from Nikita Chuiko at Kolesa.ru. It’s not the first Bronco truck rendering we’ve seen since the SUV debuted earlier in July. But this could be the best one in terms of the final design, as it envisions a rather simple conversion with an elongated backside and a removable hardtop still in place. In short, it's everything we'd expect to see in a Bronco truck.

It’s not quite that simple, however. The wheelbase is slightly longer here, enough so that the rear fender doesn’t intrude into the door. It’s virtually identical to what Jeep does in its morph from Wrangler Unlimited to Gladiator, though curiously the Gladiator retains its cut rear doors despite having extra clearance to the wheel wells. Should the Bronco pickup rumor prove true, offering full-size doors at the back could be a selling point over the Gladiator, and as we’ve already seen, Ford is very keen to cut into Jeep’s market share.

One Bronco, Many Ways:

In this instance, market share isn’t just about Jeep. Should the Bronco pickup become reality as reported for 2024, that will be four separate Blue Oval trucks where there use to be just one. Such variety could well impact Ford’s own market share in the full-size category, and what about the existing midsize Ranger? If the Bronco proves to be as successful as the initial reactions suggest, it would be difficult for the automaker to not go after Gladiator with a truck version.