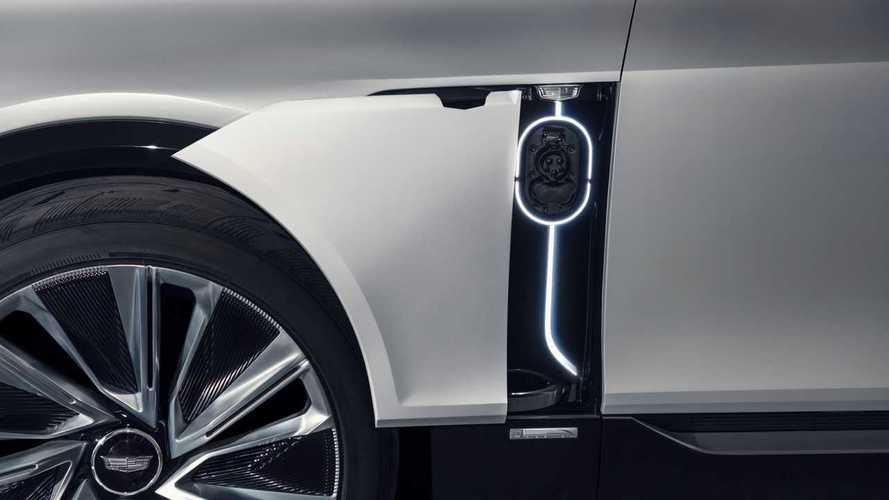 My, what a big charging door you have.

We're just a few days away from the Cadillac Lyriq electric SUV’s big debut, the first of many in the brand's planned EV onslaught. So far we've seen a few Lyriq teasers, one showing the SUV's sleek silhouette and another touting the car's impossibly long infotainment screen. Our latest look at the upcoming Lyriq shows off the SUV's weirdly huge charge port door and some of the wheel details.

Located just behind the left front tire, the massive charge port door actually makes up about half of the front fender. It opens forward, extending over the front wheel, to reveal the charging port surrounded by some interesting lighting details. It's unclear whether the door is spring-loaded or motorized, but it's definitely an eye-catcher.

As mentioned, the teaser also gives us a closer look at the new Cadillac Lyriq's wheels. The high-spoked, directional rims with what appears to be gloss black and/or carbon fiber inserts should add some edge to the SUV's overall look. What's worrying, though, is that they do share something in common visually with the failed ELR coupe (remember that thing?).

Most of the Lyriq's important details – things like performance, range, and price – are still under wraps. But we do know that the new Caddy will use General Motors' modular platform for electric vehicles as its base, pack new Ultium batteries, and offer advanced features like SuperCruise.

We'll know all there is to know about the electric SUV when it officially debuts on August 6, before going on sale sometime next year. Lyriq production will happen at the updated Detroit-Hamtramck Assembly Plant following the $2.2 billion investment to make the site a hub for future EVs.

Inspired by craftsmanship and driven by innovation, Cadillac LYRIQ represents the first in an upcoming portfolio of battery-electric luxury vehicles from Cadillac.

The journey began back in 2019, when Cadillac announced it would spearhead General Motors’ shift to an all-electric future and released the first images of a crossover built on GM’s next-generation battery electric architecture.

The story continued earlier this year with the announcement of GM’s new Ultium batteries, proof that Cadillac’s all-electric future is bright. With Ultium at its core, Cadillac will deliver a full portfolio of luxury electric vehicles.

On Thursday, Aug. 6, 2020 at 7 p.m. ET, Cadillac will take the next step in this journey with a virtual reveal of the Cadillac LYRIQ, which will be broadcast on Cadillac’s media site. Following the reveal, GM leadership and the team behind the Cadillac LYRIQ will host a live Q&A. A question submission link will be available during the reveal.

Until then, explore the photo gallery to see Cadillac’s journey to date and for a glimpse at Cadillac’s first all-electric crossover.