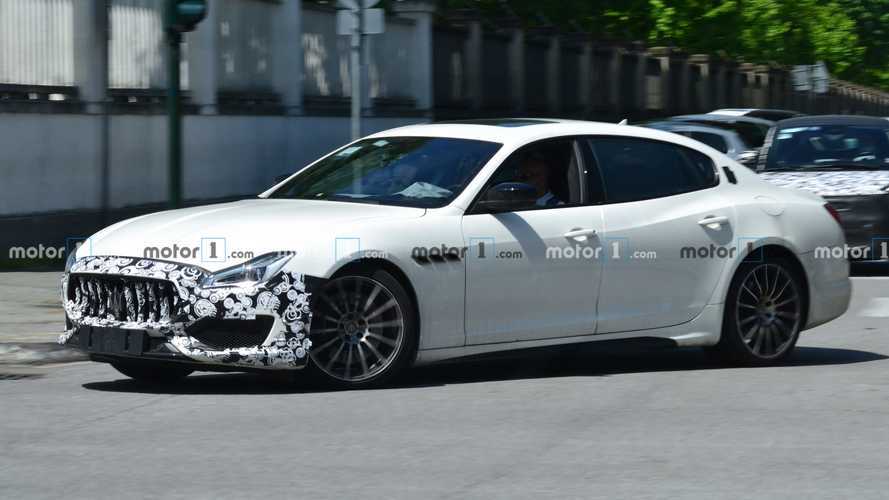 There are probably some powertrain upgrades, too.

The refreshed Maserati Quattroporte continues development in camouflage that doesn't really hide much. There are hints that the bigger changes are happening under the hood, though.

The refreshed Quattroporte wears a new nose. The headlights now have their LED running lights along the upper edges and clear sections on the sides. The uprights in the grille are thicker, and the inlets in the front fascia are a little larger.

Inside, a revised cabin reportedly has an updated infotainment system with a larger screen. Expect there to be a digital instrument cluster, too.

Maserati plans to debut the high-performance Quattroporte Trofeo on August 10, in addition to Levante and Ghibli versions. The models reportedly use a new 4.0-liter V8 that might make around 590 horsepower (440 kilowatts). There would also be suspension and brake upgrades to cope with the extra power.

It's also possible that the Quattroporte may get the mild-hybrid powerplant from the recently updated Ghibli. The setup consists of a turbocharged 2.0-liter four-cylinder engine with a 48-volt alternator and a rear-mounted battery. This provides an output of 330 horsepower (246 kilowatts) and 332 pound-feet (450 Newton-meters) of torque.

What To Expect From The Updated Quattroporte:

Maserati Ghibli And Quattroporte Trofeo Teased Ahead Of August Debut

These tweaks should inject a little more excitement into the aging sedan. The existing model dates back to a debut in 2013, which is practically ancient given the rapid pace of automotive tech development in the last decade.

According to Maserati's latest product plan, this update to the Quattroporte is just a mid-cycle refresh for the sedan. An all-new model arrives in 2022, and it would include an electric version.