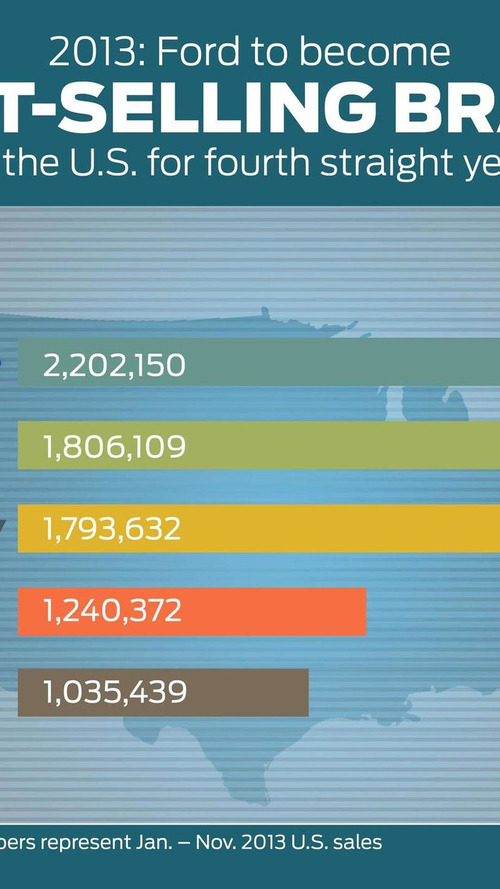 As 2013 comes to a close, Ford is claiming victory as they are expected to become the best-selling automotive brand in America for the fourth consecutive year.

As 2013 comes to a close, Ford is claiming victory as they are expected to become the best-selling automotive brand in America for the fourth consecutive year.

The numbers are still coming in but Ford expects to sell more than 2.4 million vehicles in America in 2013. Furthermore, at the end of November, Ford widened their lead over Toyota by 396,041 vehicles.

As the numbers show, 2013 was a banner year for Ford as the company saw significant growth in the western and southeastern parts of the United States. In the West sales were up 23 percent, while Southeastern sales climbed by 18 percent.

A large chunk of the growth is being attributed to new models such as the Escape which is projected to have sales totaling more than 300,000 units. The Ford Explorer also saw significant gains as sales were up by approximately 15 percent. However, the big story is the F-Series which continues to dominate with 688,810 sales through November.

According to Ford's U.S. Vice President of Marketing, Sales and Service, “The great news is that we are not overly reliant on any one segment – we’re seeing double-digit sales growth in cars, trucks and utilities." John Felice went on to say "The Ford brand has had more retail share growth than any other brand in the country, with our most significant gains coming from import-dominated coastal markets. With 16 launches next year, we’re looking to keep our sales momentum going.”

Gallery: Ford on track to become the best-selling automotive brand in America