These updated police cars would be hard to dodge.

Dodge has just updated the Durango lineup for the 2021 model year. Although the new SUV lineup was just a facelift, it was a headliner for the mere fact that it finally gets the Hellcat treatment. Yes, there's a new 2021 Dodge Durango SRT Hellcat and it makes a whopping 710 horsepower (529 kilowatts) and 645 pound-feet (875 newton-meters).

But Dodge isn't done yet and the Michigan-based automaker is now turning its sights on its law enforcement cars. Dodge Law teases the Durango Pursuit along with the Charger Pursuit, both for the 2021 model year.

There isn’t any additional info that came with the teaser, except for the camouflaged police vehicles. Dodge Law, however, mentioned that these models will be available for order by September 2020. Given that timeline, we expect to see an official release from Dodge regarding these new Pursuit models.

With that said, Mopar Insider speculates that the 2021 Dodge Pursuit will get the R/T Tow N Go Package, which comes with 5.7-liter Hemi V8 and can pull up to 8,700 pounds. It also has an increased top speed of 145 miles per hour (233 kilometers per hour).

The World's Most Powerful SUV: 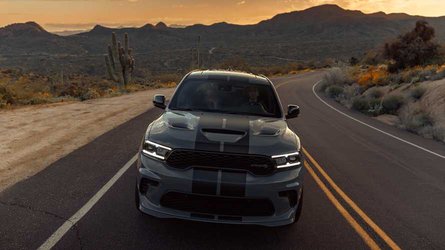 As for the 2021 Dodge Charger Pursuit, Mopar Insider expects it to get minor changes. It will still carry the Pentastar V6, rear-wheel-drive setup, though a more powerful 5.7-liter Hemi V8 and all-wheel-drive version will also be available. Of course, the Charger Pursuit should still get driver and passenger doors with ballistic protection.

Of note, the Charger Pursuit is the bestselling law enforcement sedan on the road today. With these refreshed Pursuit models underway, we're expecting Dodge to reinforce its presence in law enforcement – so yeah, criminals, beware.