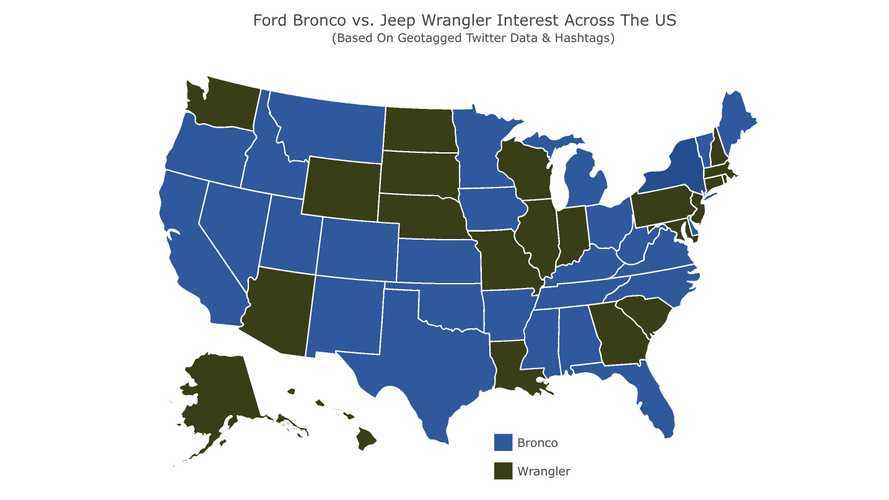 Let’s look at the tweets.

Battle lines are being drawn. Reservists are being activated. The battle between the Ford Bronco and Jeep Wrangler is just beginning. And, like most things online, will never go away. With the new 2021 Bronco making plenty of waves since Ford revealed it last week, there’s been plenty of attention paid to the SUV’s trick features and off-road capability. And a lot of that time has been spent comparing those features and specs to the Wrangler.

While the Bronco won’t go on sale until Spring 2021, there’s plenty of excitement online. PartCatalog.com decided to take to Twitter to determine which of the off-road SUVs is generating the most buzz in each state in the US. Then, the company compiled it into the map above where you can see which state leans Bronco and which ones favor the Wrangler.

The site tracked over 240,000 tweets from the last two weeks, using geotagged Twitter data and hashtags like #builtwild, #jeepwrangler, #jeeplife, #fordbronco and more to determine which states favored which SUV. It’s not a perfect split of the country, though, with 28 states favoring the Bronco to the 22 that had more support for the Wrangler. The Bronco’s “win” could result from genuine enthusiasm or because of the reveal itself. Ford hit it out of the park with generating Bronco buzz far outside the automotive community.

While the Bronco and Wrangler will be to focus for many as the off-road rivalry heats up, there’s also the Land Rover Defender that offers similar capability. Still, it lacks some features of the other two, like the removable roof and doors. However, the addition of the Bronco to the marketplace should be a win for consumers. If the Bronco is as capable as it appears, Jeep will want to do what it can to fend off Ford’s new horse.

Be Up To Date On The Best Bronco News: