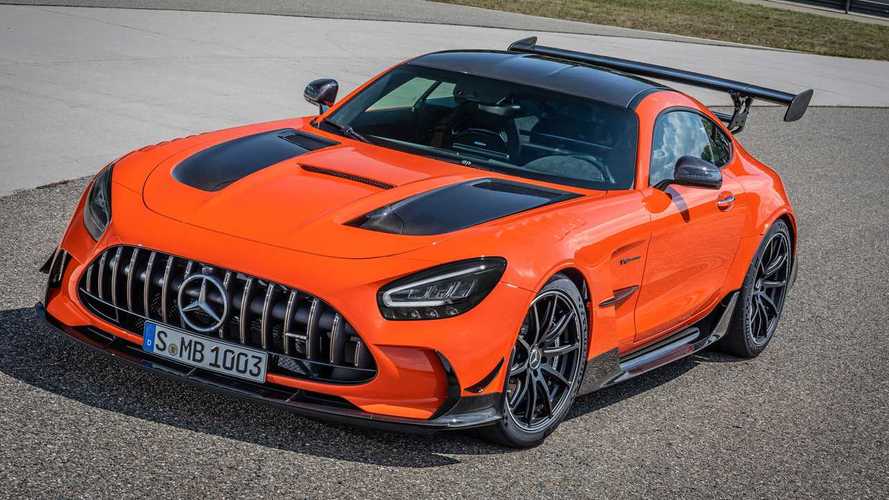 Mercedes-AMG took the wraps off the hotly anticipated GT Black Series about two weeks ago and now we finally get to find out how much it costs. Available to order in Europe, AMG’s most powerful V8 car to date costs an eye-watering €335,240 in domestic market Germany where the configurator is already up and running. Want that striking AMG magma beam paint? You can only have it on the Black Series and it’ll cost you a cool €8,468. Alternatively, the GT R’s AMG green hell magno can be had for the same money.

You can throw even more money at Mercedes for the Black Series as the high-performance coupe can be had with a plethora of optional packages. For example, the AMG Track Package (€7,540) encompasses a titanium roll cage, four-point seatbelts, and a fire extinguisher in case something goes horribly wrong. Even though the car has been developed to be as light as possible, you can still add memory seats, mirrors, and steering column by getting the Memory Package available for €1,914.

Additional goodies available at an extra cost for the Black Series include the €904 Lane Package (with Blind Spot Assist and Lane Keeping Assist), €1,461 Park Package (with front and rear cameras), €916 Keyless Go Package, and a €510 Anti-Theft Package. Individual options vary from a €4,814 Burmester sound system and a €174 touchpad to a larger 75-liter fuel tank priced at €93 and tinted windows for €430.

That fire extinguisher we mentioned earlier can be bought separately for €139 and you can also order the Black Series with a €261 garage door opener. Rounding off the list of extras are the adaptive high-beam assistant (€116), a tire kit (€58), carbon fiber door sills (€1,044), a less fancy Burmester sound system (€1,508), trickle charger (€128), and the PRE-SAFE System (€638). The later automatically makes changes to the car’s settings in case of an imminent collision to reduce the risks of injuries by rolling up the windows, tightening the seatbelts, seat bolsters, etc.

Get Up To Speed With The New Black Series:

All in, the Mercedes-AMG GT Black Series can cost nearly €365,000 in the fully loaded specification. Here in the United States, Mercedes has confirmed that pricing for the AMG GT Black won't be available until nearer the car's on-sale date, early in 2021. We do know, though, that the aforementioned Track Package won’t be available stateside, in Canada, or China.

Interestingly, there are no details regarding how many cars will be built, but given the hefty price tag and the model's special status, it’s safe to say the sixth member of the Black Series lineup will be a rare sighting.

Affalterbach.  Just around one week after its world premiere, the new Mercedes-AMG GT Black Series (combined fuel consumption 12.8 l/100 km, combined CO2 emissions 292 g/km)[1]  can already be ordered from authorised dealers at a starting price of 335,240 euros[2] . During the development of the new flagship model in the GT family, the engineers in Affalterbach pulled out all the stops in their design expertise. The results include the most powerful AMG V8 production engine of all time, combined with a highly expressive design, the most sophisticated aerodynamics, the most intelligent material mix and the most thrilling driving dynamics. With an output of 537 kW (730 hp), the new super-sports car embodies the brand's traditional roots in motorsport to the ultimate degree – together with a design directly derived from the current AMG GT3 racing car. The special AMG magma beam paint finish is reserved solely for the AMG GT Black Series, and can be ordered as optional equipment.

The similarity to the AMG GT3 and AMG GT4 racing cars is visually and technically stronger than ever before. As well as the new, considerably larger cooling air intake of the AMG GT racing car, another direct derivative from motorsport is the new carbon-fibre bonnet, with two large exhaust air outlets made from black-finished carbon surfaces. The large outlets guide the warm air, which is fed from the diagonally positioned cooling pack, out of the engine compartment. This technology increases the overall downforce. At the same time, the air resistance is reduced and the air mass flow for cooling the engine is optimised. The bearings on the upper and lower wishbones of the rear axle also come straight from motorsport. Their design means they have no play, which means toe-in and camber do not change even under high loads. The AMG GT Black Series therefore allows for precise steering, gives clear steering feedback and thus delivers better cornering performance, too.

Data and prices at a glance

[2] All prices in this press release are non-binding price recommendations for Germany incl. 16 % VAT. (The applicable VAT rate is the one valid at time of delivery. Discounted tax rate valid until 31.12.2020)