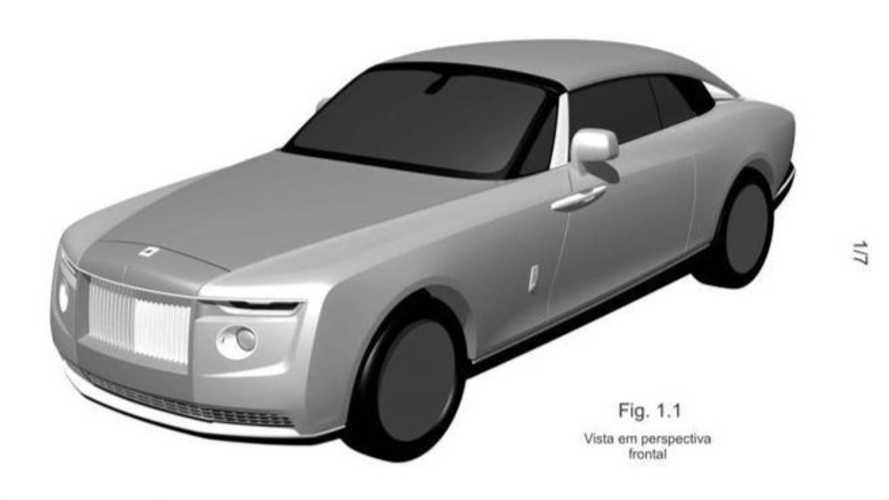 The roof is the coolest part of the design.

Rolls-Royce appears to be working on a droptop version of the Sweptail that is likely to be an upcoming one-off or concept. The images come from a design filing in Brazil on July 21. Coche Spias was first to discover the pictures.

The roof is the most visually interesting aspect of this vehicle. The renderings don't make it explicitly clear whether the pieces running from the top to the sides of the rear deck are fixed in place or removable. Our guess is that this is a bikini-style covering in a style similar to the Porsche 718 Boxster Spyder.

The front end design looks straight from the Sweptail. There are large, circular headlights with skinny LED strips above them. Rolls' trademark multi-slatted grille occupies the space between the lamps. Compared to the Sweptail, the chrome rib on the hood is absent from this vehicle.

Looking at the rear in profile, the deck and the bumper taper to a point in a style that's similar to Sweptail. Looking from the top, there are vertical lines across the trunk. We suspect this is teak wood decking similar to the back of some of Rolls' previous droptop vehicles, like the Dawn. As a final touch, there are skinny LED taillights.

A BMW trademark filing from 2018 for "Boat Tail" might indicate the intended name for this vehicle. The moniker would certainly fit with the wood on the rear deck. It would match well with the Sweptail, too.

If this model is like the Sweptail, then expect Rolls to make just one of them and charge a massive price for it. The company never confirmed the cost of acquiring the earlier model, but there was a rumor that the figure was as high as £10 million (equivalent to $12.8 million at the time).

A debut date for this vehicle is a complete mystery. With the cancellation of so many automotive gatherings due to COVID-19, it's hard to know where Rolls-Royce could hold the debut. A dedicated event is an option, though.