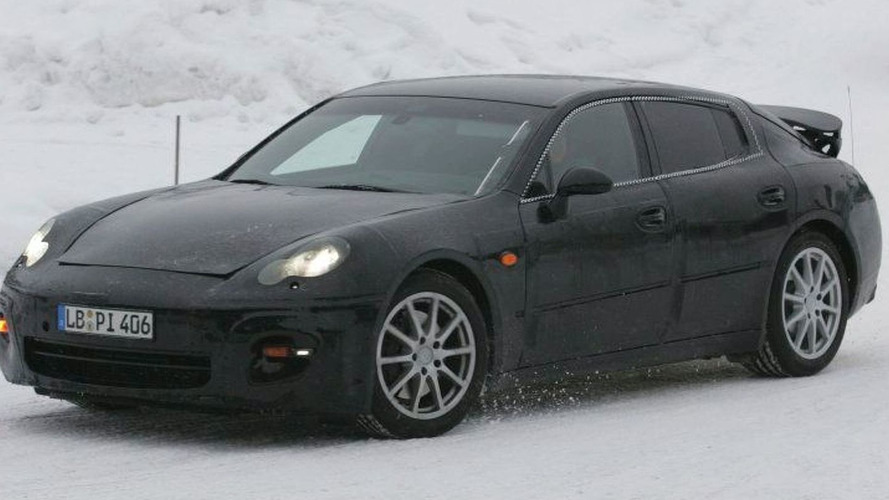 Car manufacturers, who traditionally make a living from producing middle class four seaters and saloons favour a most motivating task for designers and engineers: "Take the components from our family car and please make a pretty coupe or a nice sports car out of it." That is - of course - a dream. Now to the nightmare, the opposite case: "Take our sports car and please make a nice family car out of it". Inside Porsche, dream and nightmare have been living quite close together repeatedly over the years. In the beginning was the dream which fascinated the designers already back in 1938. The very first prototypes of the VW-Beetle were hardly out, when already three racing coupes were developed on the Beetle's chassis to participate in the long distance race Berlin-Rome. Ten years and another World War later, Ferry Porsche introduced the first sports car named Porsche. That was the dream. The original 356 was equally based on the VW-Beetle, from which of course it came a long way due to its decades long evolution. However, like with any evolutionary development, Porsche's ways lead into a dead end quite often. And this preferably with prototypes and single pieces featuring four seats or even four doors. Already in 1952 the Porsche team created a four-seater 356 with an elongated wheelbase as an answer to the family-friendly Porsche-customers of the last century. Yet, the concept was dumped. In the following years, instead of Porsche's own engineers, several styling companies busied themselves creating various Porsche four-seaters. Wendler in Reutlingen in Germany and Beutler in Switzerland came up with special models, but the problem remained always the same: the Porsche-typical lines and proportions ran out of focus, nothing really matched anymore. In 1960 Butzi Porsche designed the first concepts of the successor to the 356. They had a glass dome with roundabout view and more headroom for the two rear passengers. But finally the typical Porsche-fastback became the winner for the 911, much to the relief of all classic-Porsche fans worldwide. In 1969 Pininfarina introduced an elongated 911 four-seater - a true nightmare technically as well as from its looks. The vehicle's rear end tended to sway like a metro city bus and the proportions were anything but attractive. Nowadays this car is privately owned. Upon his 75th birthday Ferry Porsche received a very spectacular present from his crew: a four-seater 928 sports wagon. Up to now this car was considered the only well-made and appropriate four-seater by Porsche, however, nobody ever thought of it as a production model since the image of the 928 model range already had problems due to a wrong marketing strategy. In 1988 Porsche came up with the 989, a potential successor to the 928 with four doors. It did in fact include styling elements from the 911, but all in all looked just too stretched and sort of mangled and never went into production either. Now, almost twenty years later, the engineers at Porsche's development center in WeiÃƒÆ’Ã†â€™Ãƒâ€¦Ã‚Â¸ach near Zuffenhausen are finally working on the four door Porsche Panamera. The car has come to an advanced stage of development, with prototypes sighted and photographed during tests in many places of the world. And as it seems, some right clues have been taken from the experience with its less lucky predecessors. The Panamera - designed by Porsche's chief designer Michael Mauer - does not look like a stretched 911 but rather like a low levelled Cayenne. The space and off-road model range Cayenne has succeeded in achieving its acceptance by the public in a radical way. And that is why the Panamera will no longer be looked at as a faux-pas of the sports car maker Porsche, but rather as an independent Grand Touring car of the extra class. Some detours do take a little longer sometimes.

Photo 1: computer image Panamera
Photo 2: Panamera prototypes
Photo 3: FILE-photos - the very first four door Porsche built in California 1967 by a Californian specialist Troutman & Barnes . Made from two crashed 911 cars with two opposed doors per side. The car has since disappeared.
Photo 4: in 1989 the American Sunroof Company (ASC), former chairman Heinz Prechter, developed with some connection to Porsche this 928 four-seater with four doors (rear doors less wide). Only one was created and is today in private possession.
Photo 5: Porsche's 989 from 1988. The four door four-seater was powered by a 3,6 ltr. V 8 front engine. The file photo is computer enhanced.