The configurator isn't live yet, but that didn't stop Bronco fans from digging up over 50 new photos.

The Ford Bronco is here, and frankly, people can’t get enough of it. Rather surprisingly, Ford didn’t launch its reborn off-roader with gobs of photos as we often see in new vehicle debuts. We were sent plenty of spiffy media photos, but with seven different trim levels and a plethora of colors, there’s much left to the imagination.

The forum members at Bronco6g.com are arguably the most excited of all. Since the Bronco’s debut, we have seen order guides and dealer invoice pricing pop up, and in a search for more photos, the forum found something of a backdoor into the Bronco configurator. Before you go jumping to Ford’s website, no, the configurator isn’t active. For that matter, it seems this backdoor is now closed. But forum members were still able to download all kinds of interior and exterior photos showing just about every Bronco trim level and color option you can get.

As you peruse the gallery above, you’ll see two-door and four-door interior and exterior layouts for various models. We’ve tried to name them when applicable so you can associate a trim level with the décor, but on the exterior shots you’ll notice a curious similarity. Many of the photos show not a clean and pristine Bronco as you might find it in the dealer showrooms. Instead, the shots feature dirt and mud splatter down low on the fenders and doors. It seems Ford is indeed very keen to make sure its new Bronco isn't portrayed as an urban pavement-dweller. 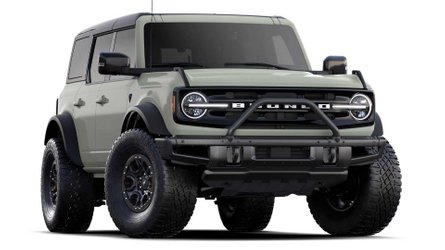 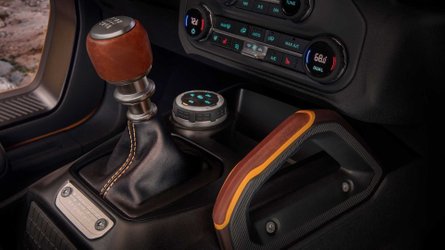 Photos of dirty vehicles aren’t any big deal from an automaker, but keep in mind that these aren’t press photos. According to the forum, these are the shots people will see when the Bronco online configurator finally goes live to the public. We aren’t sure we’ve ever seen a manufacturer present its vehicles dirty in such a situation – it’s a small touch but one that speaks volumes on Ford’s extensive effort to market the Bronco as an adventurous, off-road lifestyle machine.

We suspect the configurator will go live closer to the Bronco’s on-sale date in 2021.